(Photos variously borrowed from Randoneurs Portugal facebook, Clare Irwin and Google and even some of my own) 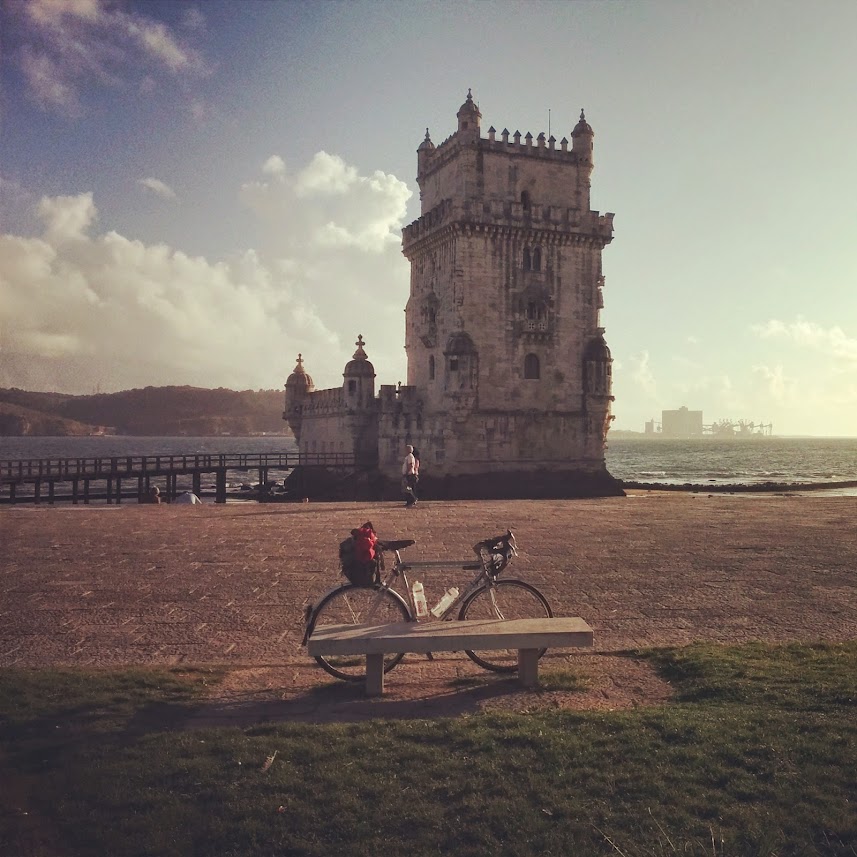 I’m sure when I look back on it, the three days on this Brevet will rank right up there amongst the best times of my life.  I wish I was a poet or a writer but unfortunately I spend most of my time working my left brain so prose does not come easily to me.

But, if I had to sum it up the experience one word, it would be hospitable.

If your free in 2016 – put this one in your diaries.  I couldn’t recommend it enough.

It was David Bailey’s fault.  I was missing the Red Line/Red Lane as I would be away on holiday and, although I did briefly flirt with the idea of a 600Km in Italy, I decided summer holiday was really family time.  Also, I mentioned it jokingly and, having gone overdrawn helping at MF, it wasn’t funny.

He mentioned the Alem Téjo and said he and POD were thinking about it.  1000Km.  The last ACP medal.  Pre qualification for PBP.  Requirement for randoneur 5000.  I might even be able to substitute for a 600 to get 2015 SR.

Thanks to the wonders of the internet, I’ve flights booked and application to Randoneurs Portugal.  Then came a bit of a blow – they were probably not running the event.  Doom set in.  But I hung on to hope, and my plane tickets, and the day after my birthday I got a late present – the ride was on again. 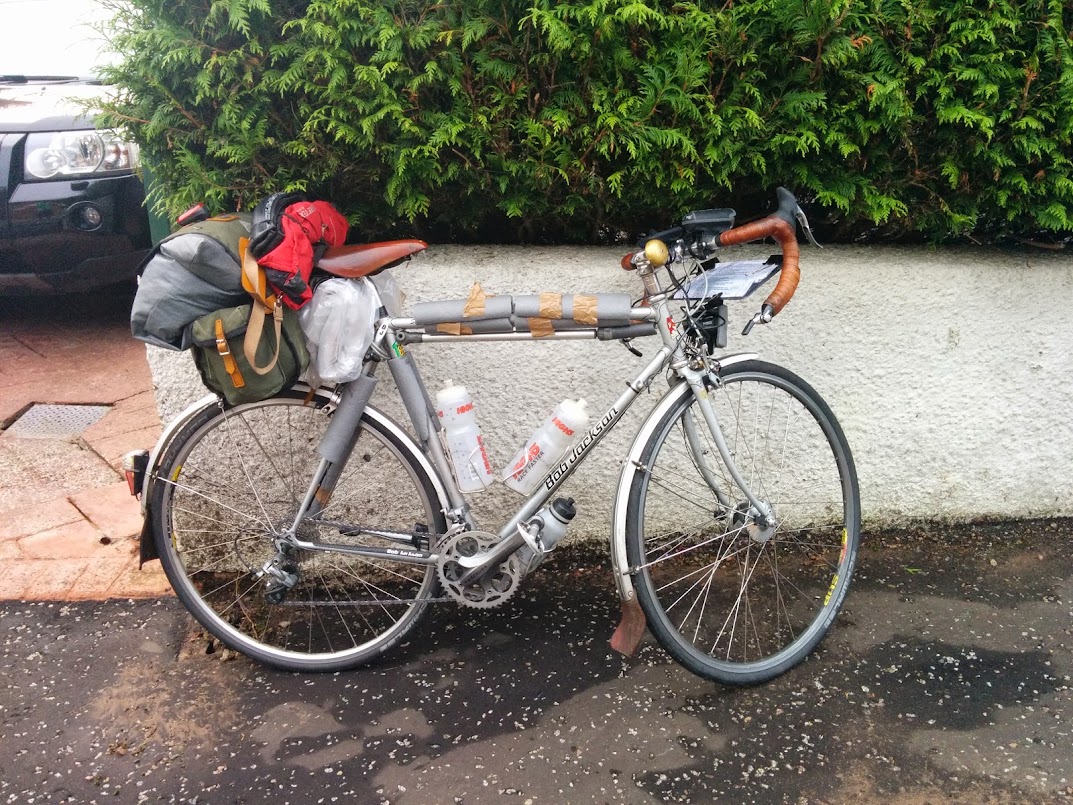 I packed far to much stuff into my Nelson Long Flap, a couple of drop bags, my big plastic bag and some pipe lining, set off for my usual spot on the AirCoach to Dublin (which was late), arrived at check-in 5 minutes before closing, packed the bike, at the desk.

Paulo, from Randoneurs Portugal met me at the airport and took me to the briefing.  Paulo is basically me, only Portuguese.  Same age, same occupation, kids same age, same mid life crisis.

Pedro, the club president, gave the briefing.  Apart from the usual safety stuff, the emphasis was on history and food.

I finished assembling my bike, checked in at my hostel (which was also the finishing point) and went for a quick spin.

That evening, over a couple of beers, I tried to verbalise to Paul, Cahal, and Claire why I did it.  For me it’s all about those moments of perfection that happen on the bike.

Of course, I’ve no gps of this, thanks to Garmin.  But here’s the route.

With typical determination, Helle, one of the other riders, arranged breakfast to be early (5:30) in the hostel.  So I had serial and bap and chucked another bap in my carradice for ‘ron’. 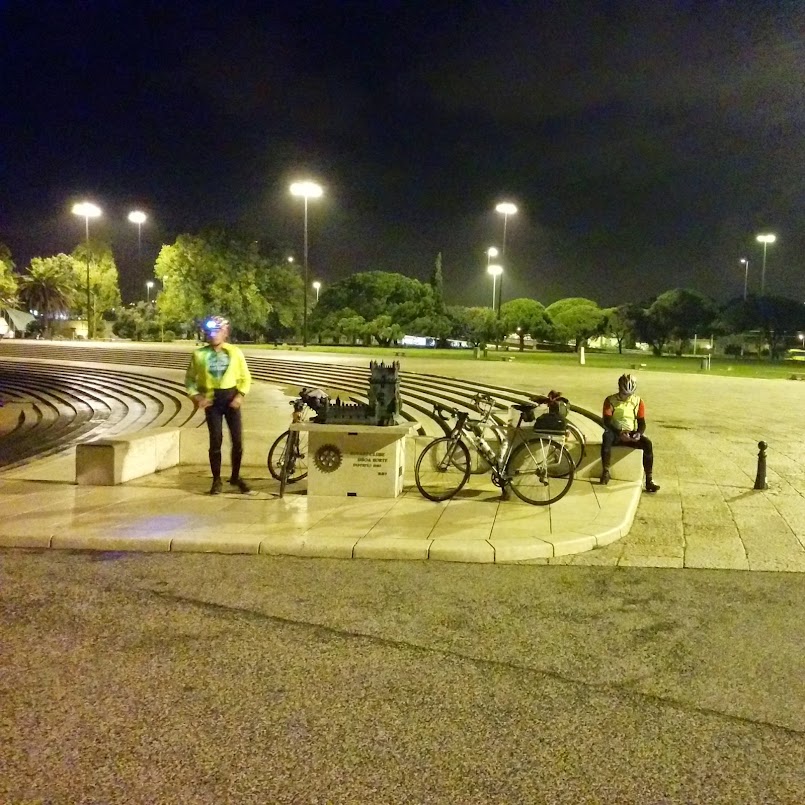 I arrived at the start in plenty of time, and slowly the crowds gathered.  I felt pretty calm.

A ride is a ride and tales of I got on the bike and off the bike doesn’t make great reading. The first bit of the day was unusual.  I had two minor mechanicals in the first 5Km (not unusual).  Rear light was not on (disconnected wire) so I switched to reserve, and my rear mudguard wrapped itself round the brakes.  Tie wraps. Then , before I knew it, we were all on our private boat. 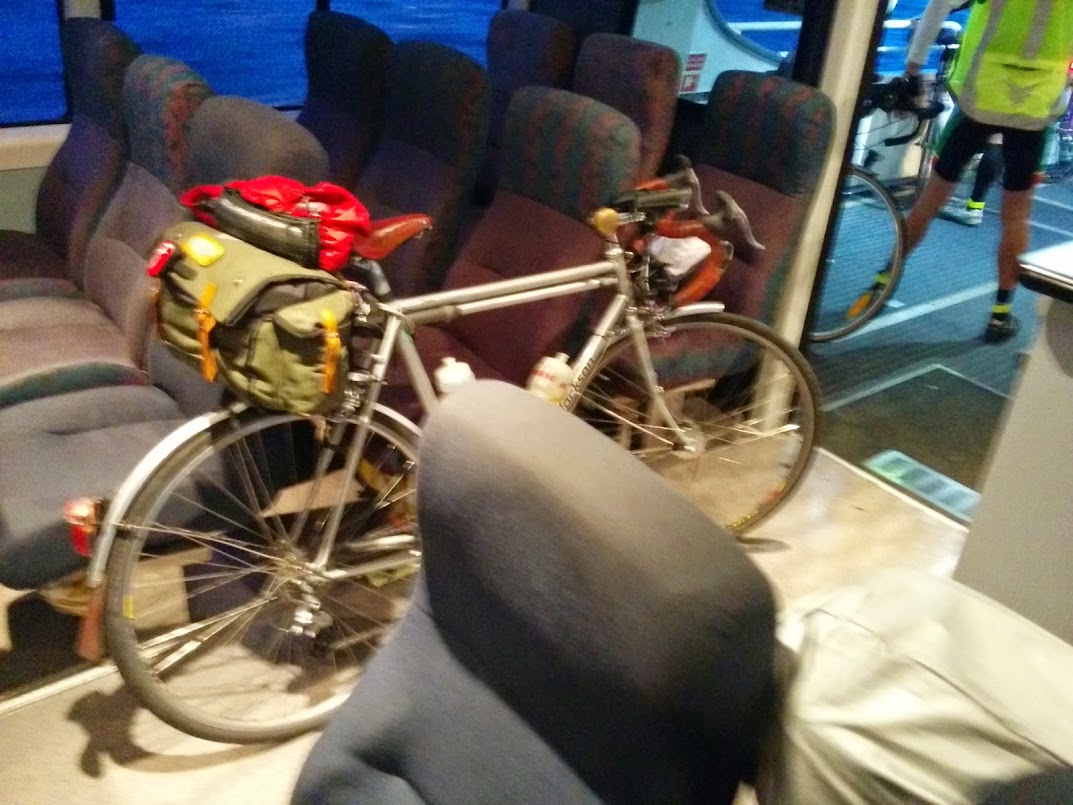 And we sailed off. 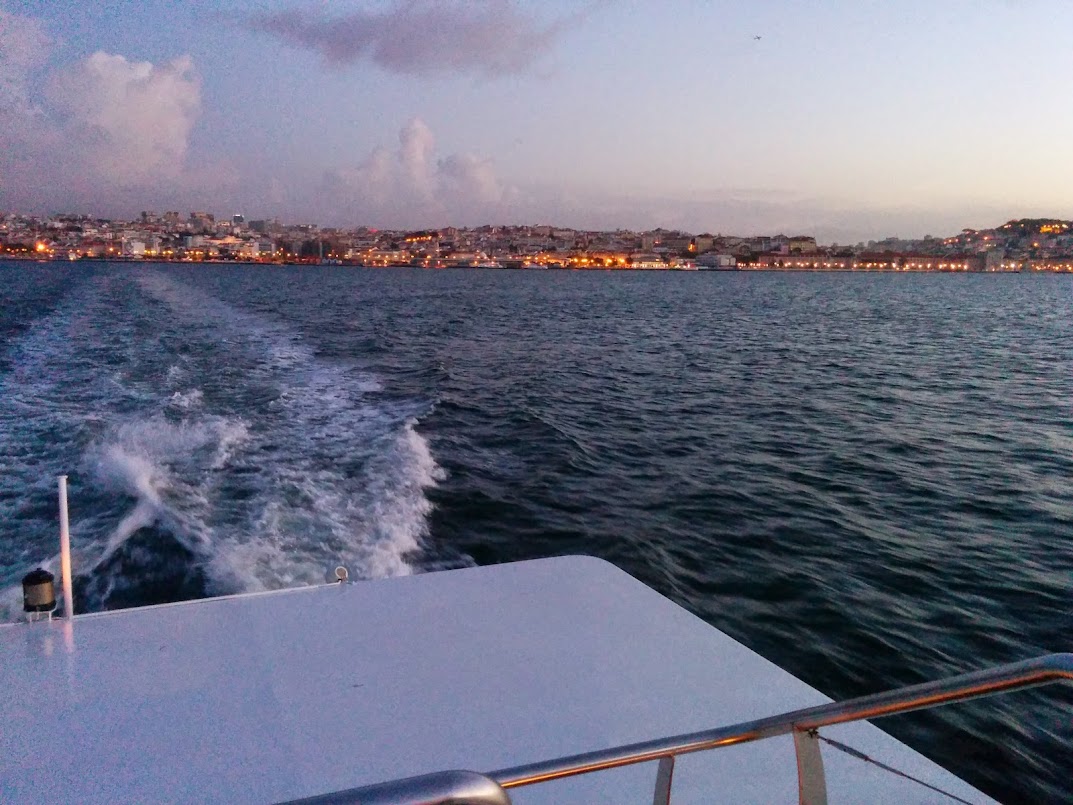 This was the first of two sailings in the morning.  There followed a nice climb with the group all together and a lovely sunrise clearing the mist.  Of course I didn’t photograph this.  POD thought his tyre was going down but it appeared to be holding.  He and I both suspected this meant trouble. 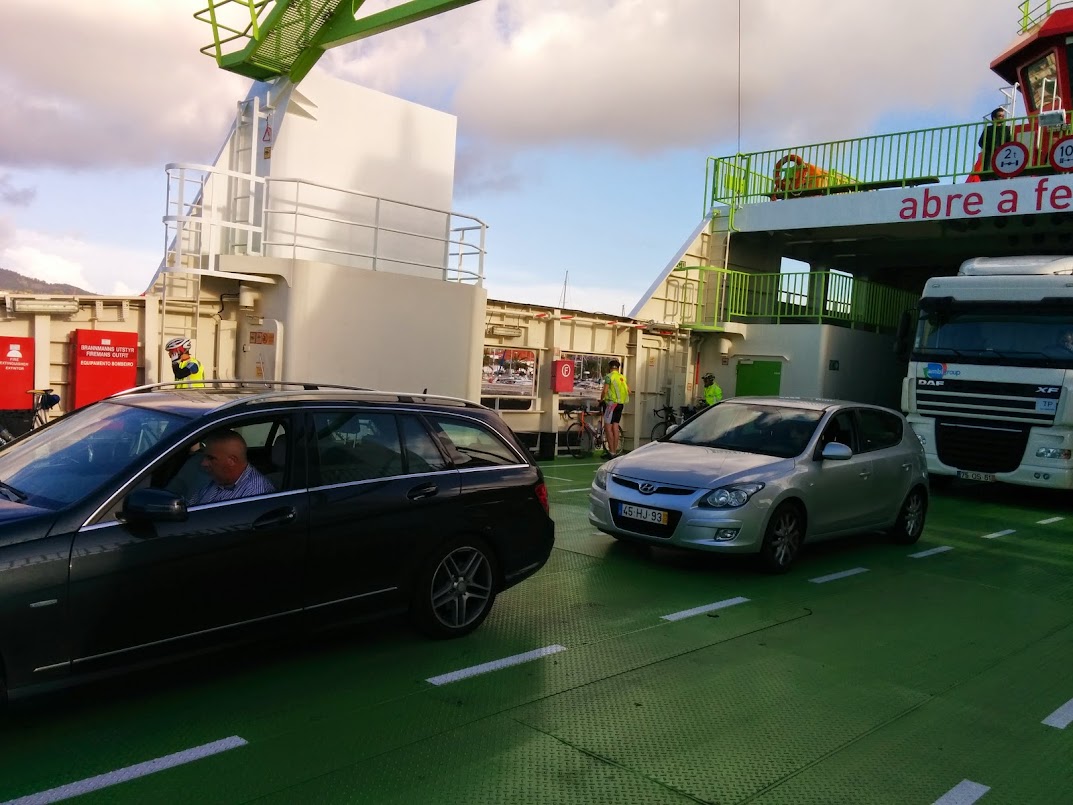 We then boarded our 2’nd (less posh) ferry.

POD takes in the view.

And what a view.

We then set off through some Paddy fields.  Most uncharacteristically, I ended up off the front with Hellé, a very strong rider from Germany.  Some of you may remember her as 1/2 a tandem team on LEL.  It soon became apparently that our riding styles were somewhat mismatched.  She wanted to go like the blazes, pedalling down hill and everything, I wanted too tootle along just quick enough to make an early lunch.  Unfortunately, she did not want to ride alone, so I stuck on her wheel an rode at paces Paul Newmann would frown upon as being most un-audax like.  If she went of the front I simply had to ring my bell and she would slow.  Like having my own personal domestique.

The pace began to tell on me but I got my revenge, so to speak.  A heavy downpour came in.  “Shall we stop”.  No way was I going to give up all that hard work for a bit of rain.  I felt a bit guilty at the next control as she had heavy shoes on which would take some time to dry.  Still, if your ride with the devil.

So there I was, me, “the Stuart McLean”, first in at the control in Cercal.

POD came in shortly after having used two tubes. He was still smiling, of course.  He changed the tyre.

Pizza and coffee consumed.  Another sandwich in the bag.  Hellé gave me the nod, and I was tearing up the road again.  This time, however, she was happy to push on as Pedro (I think) and a couple of other riders had gone off quickly. 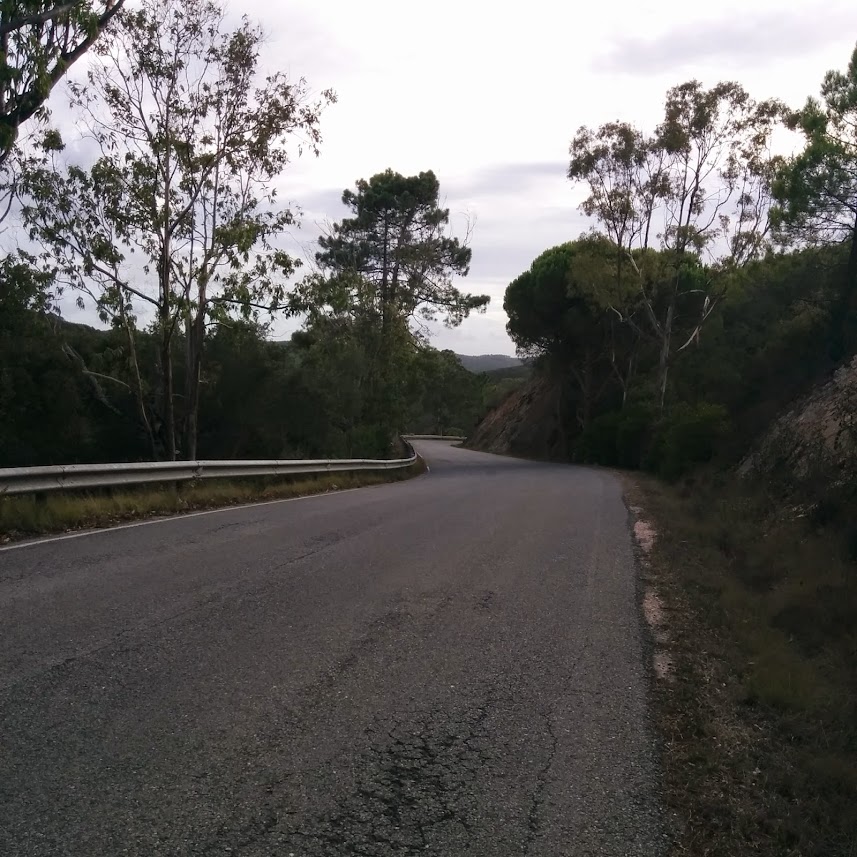 The next stop was Sagres, the very  SW tip of Europe.  With a strong SW wind, it was tough going but with rewarding scenery and early ride enthusiasm, time past quickly.  I picked up POD and Nick for a while but they were too quick for me to stick with too long.  I stopped at a supermarket for ice cream and general faffing and was probably passed by the rest of the group at this stage. 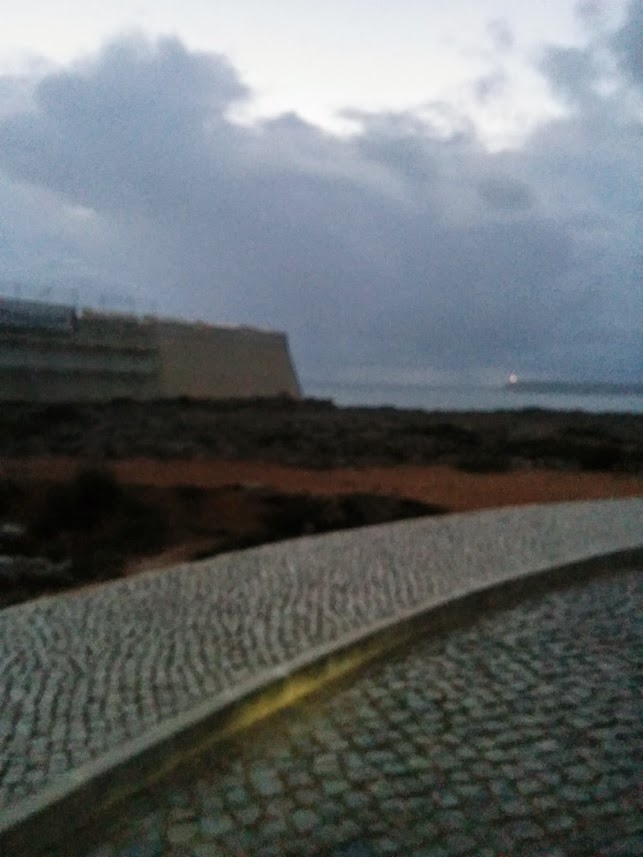 Still, eventually I got there at dusk, ate the remains of the supermarket, and controlled by question, turned round and set off accross the Algarve at night.  Heavy rain seemed to cause some to stop and shelter, but it was warm!  I stopped at a pizzeria but only the bar was opened.  Got coke and coffee and my bottles filled and ate my own supplies.

Soon I was joined by Hellé and Pedro.  My front derailleur was causing chain off every time so I stuck with the small ring.

We split somewhere along the way s the last 50km or so was solo.  I arrived in at around 4:20 am.  Despite the wind and faffing messing around on boats this is probably the fastest 425 I’ve done so I was pleased.

Welcome pasta and beer before checking in at hostel across the way for a couple of hours.

Up at 7, off at 8 after breakfast and wet lube for chain.  Cobbles were wet leaving Vila Réal and the road seemed to be closed.  But soon enough I was climbing.

Had a rear puncture on the climb.  Stopped to mend it.  Was about to get on when I noticed front was down too.  Mended that one but when putting the wheel on thought – “better check the dynamo connections aren’t shorting”.  Span the wheel.  It fell out (because I hadn’t tightened it) and both cables pulled out of the connectors.  Doh! 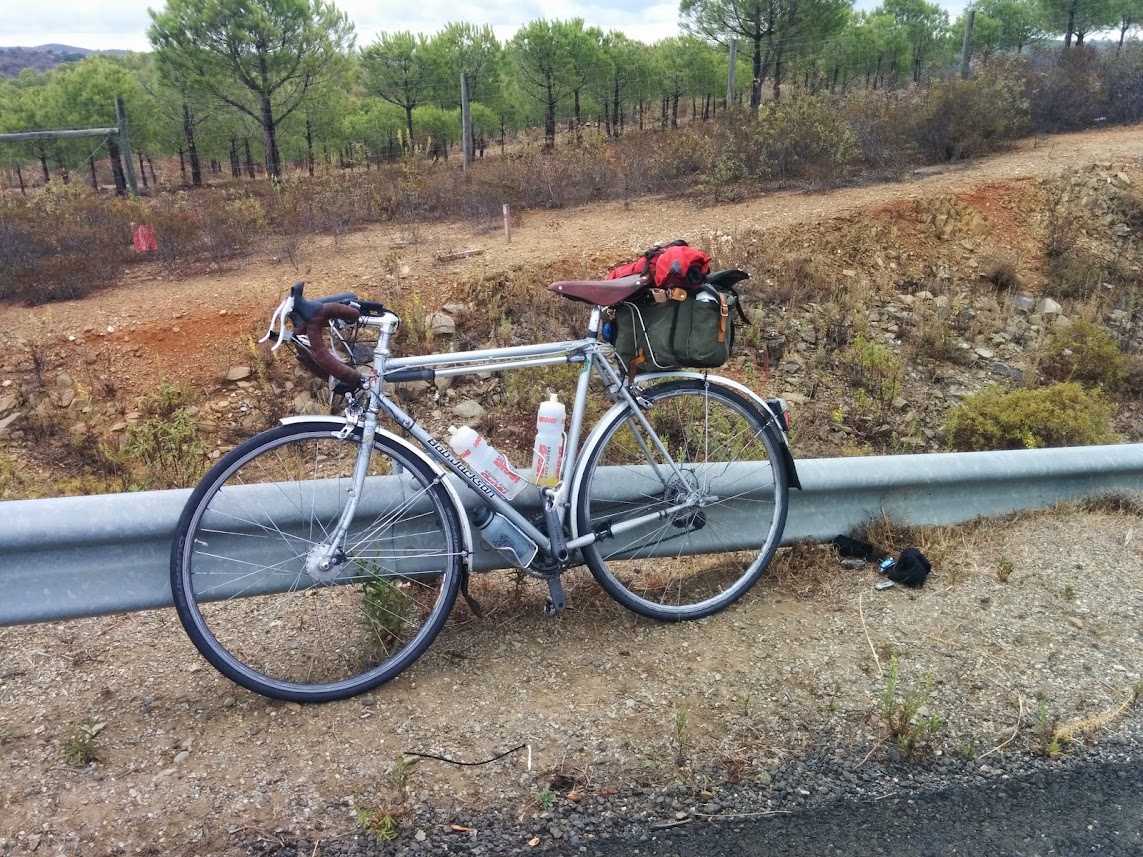 Miguel, Hellé and Pedro passed.  I had hoped to group up with them but my lack of big ring meant I could not catch anyone in descent. 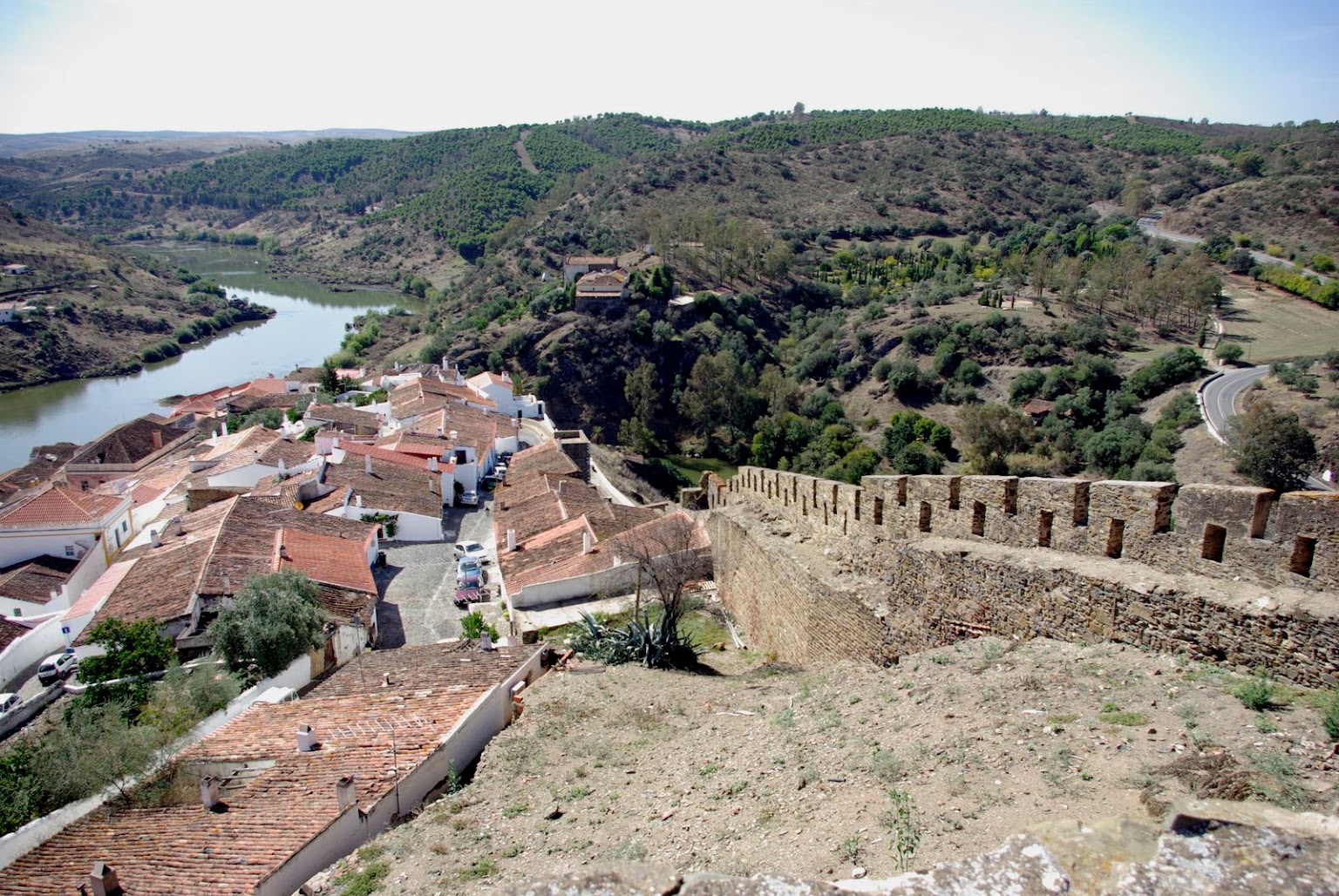 Shortly after Merlota, my Garmin did the old freeze and contunusouly reboot trick.  I had hoped frequent “ons and offs” would sort this – but it had not worked.  So, SD card out, Factory Reset, SD card in (with route on) and I was back in business.

My control at Serpa was genius.  This was meant to be a control by question at the Bean and Rice Café.  Half the riders and all the support team were just finishing off when me and José rolled in.  They had over ordered, under eaten and overpaid.  Ten minutes, two bowls of rice and beans and 2 pieces of chicken later I was back on the road.

Then I faffed buying a lead to charge my phone losing all the time I’d made up.

The I had one of those perfect moments as the sun set over a creak. 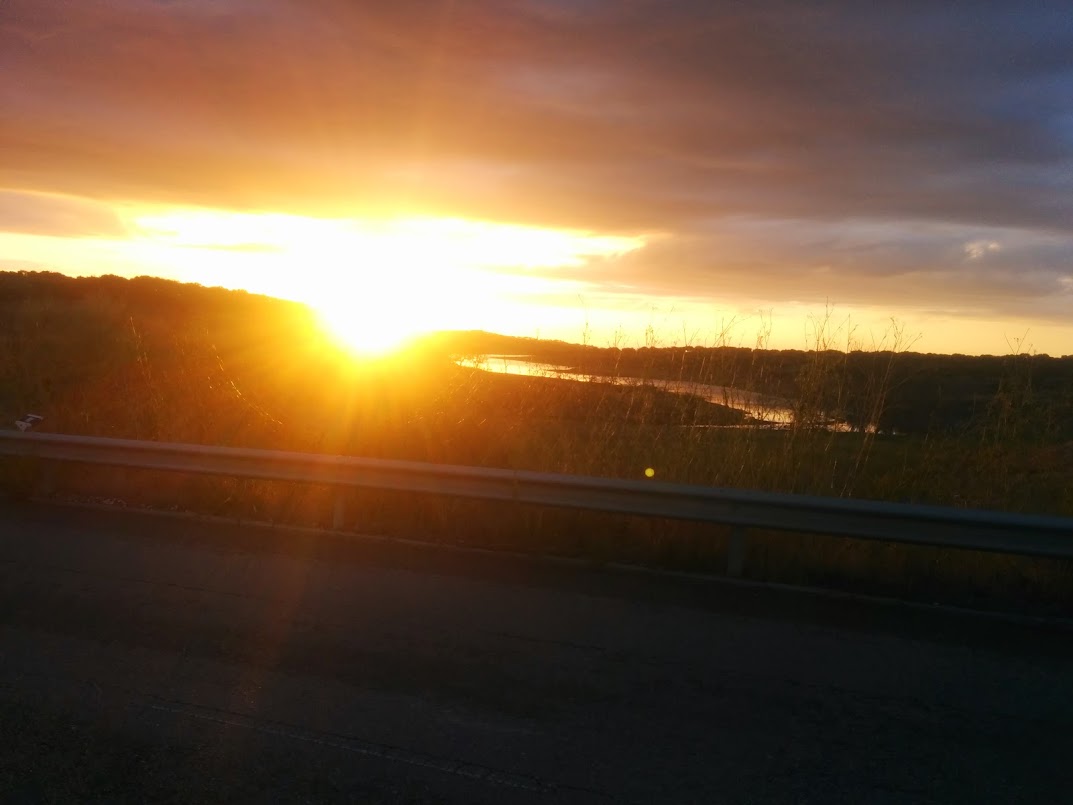 I stocked up at an Intermarché, again just has Pedro, Hellé and Miguel were leaving.  I knew Rui and two other riders (José and Carl??) were 20 minutes or so behind me – but I didn’t wait around.

At first I was enjoying the night climbing but it did become a bit relentless after a while.

After much up and downs I wondered why there were gravestones up each side of the road.  Turns out they were just tufts of grass.  So I had a chat with Sally and she reckoned we should take a rest. 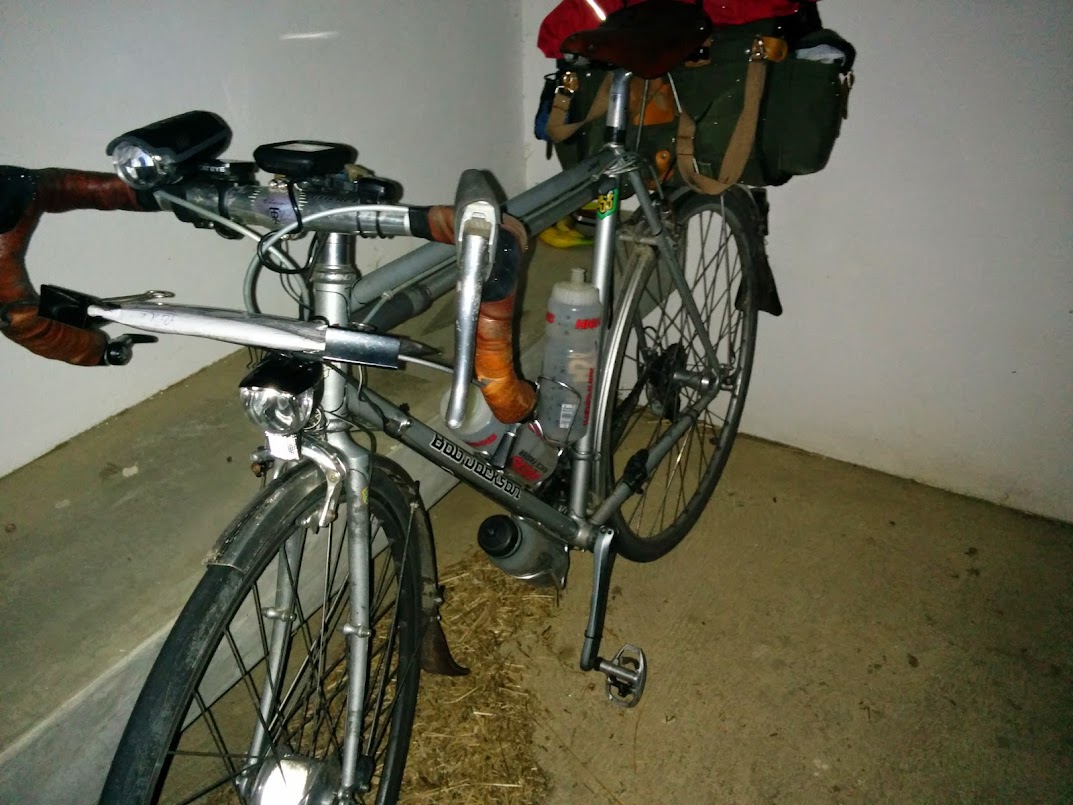 I found a handy bus shelter and settled down and slept for half an hour.  Just as I was dosing off I heard three riders behind me pass.  I woke with my alarm, cold, but luckily there was more climbing.

I rode past the same aqueduct (in the dark) a few times before realising the route had a loop to visit it and I was just following that over and over.  Please let me sleep soon.

Eventually I reached Campo Major (on a hill of course) where I forced down some food.

I went into the chalet, the only thing I could see was POD’s smile, and kicked Nick out of bed.

I taught Paulo and his mate (no name, sorry) to cook porridge.

Then Jose and I set off into the morning mist.  We stopped and he fixed (straightened) my front mech with his hands.&amp;nbsp; He only had a few words of English but he said something like “you should have bought Campy as your shimano is made of tin foil, you young fool”. He might have added something about the colour of my socks, but I couldn’t be sure

Couple of hours later I was climbing up to Castelo de Vide like Alberto Contador with Hellé on my tail asking me what I’d taken.   “Just Porridge”.

It was just perfect. 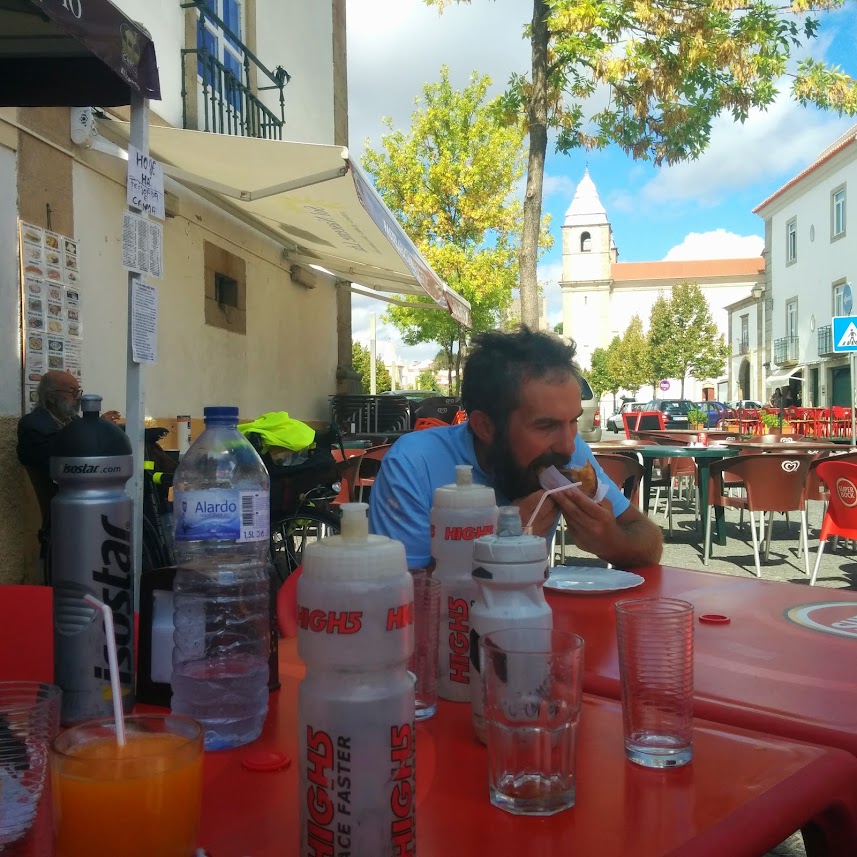 Followed by cake and soup.

I rode the rest of the day comfortably, with plenty in the tank.  Spent a good deal of time with Rui.

Eventually Lisbon drew closer as we followed the Tejo 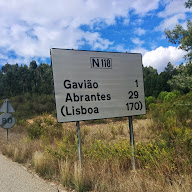 And I began to take on Carbs however I could.

Nice ride throgh the evening into Lisbon through small country roads with proper holes in them and a strange big metal (gridded) bridge.

The last 10Km through Lisbon was a bit hectic, but it was always going to be that way.

But I remembered the golden rule an finished smiling

1000Km is a funny distance as you need to ride the first 600 at standard Audax times and then once your over this you get the relaxed times.  This meant that at one stage I had just 1:40 in hand, but a day later I had 12 hours

These were the real heroes of the event.  For hours I’d be riding along thinking I bet that little silver van will be coming soon and then it would with words of encouragement, applause and even bell ringing!

Portugal really warmed to me and I will be back for more – either on the bike or off it with family.  Once you leave the Algarve, this really is a country steeped in history, culture, food and a great sense of spirit.