Below is Richard’s report.  I’ve not much to add to this other than its a great route.  The first half has some climbing – though in our case the strong SW made it tough going.  The second day is much more forgiving.

He also forgot to mention us mistaking someone’s house for the hostel, parking in their back yard and going round trying to get in.

One other point – if you were considering pressing on through the night – fill up with supplies on one of the many garages between Killybegs and Donegal town – big garage to the right on border at Beleek might open late but then your unlikely to find anything until the control at Killeshandra (excellent garage far end of town as mentioned by Richard below).  There are bus shelters in the North.

Definitely one to do. 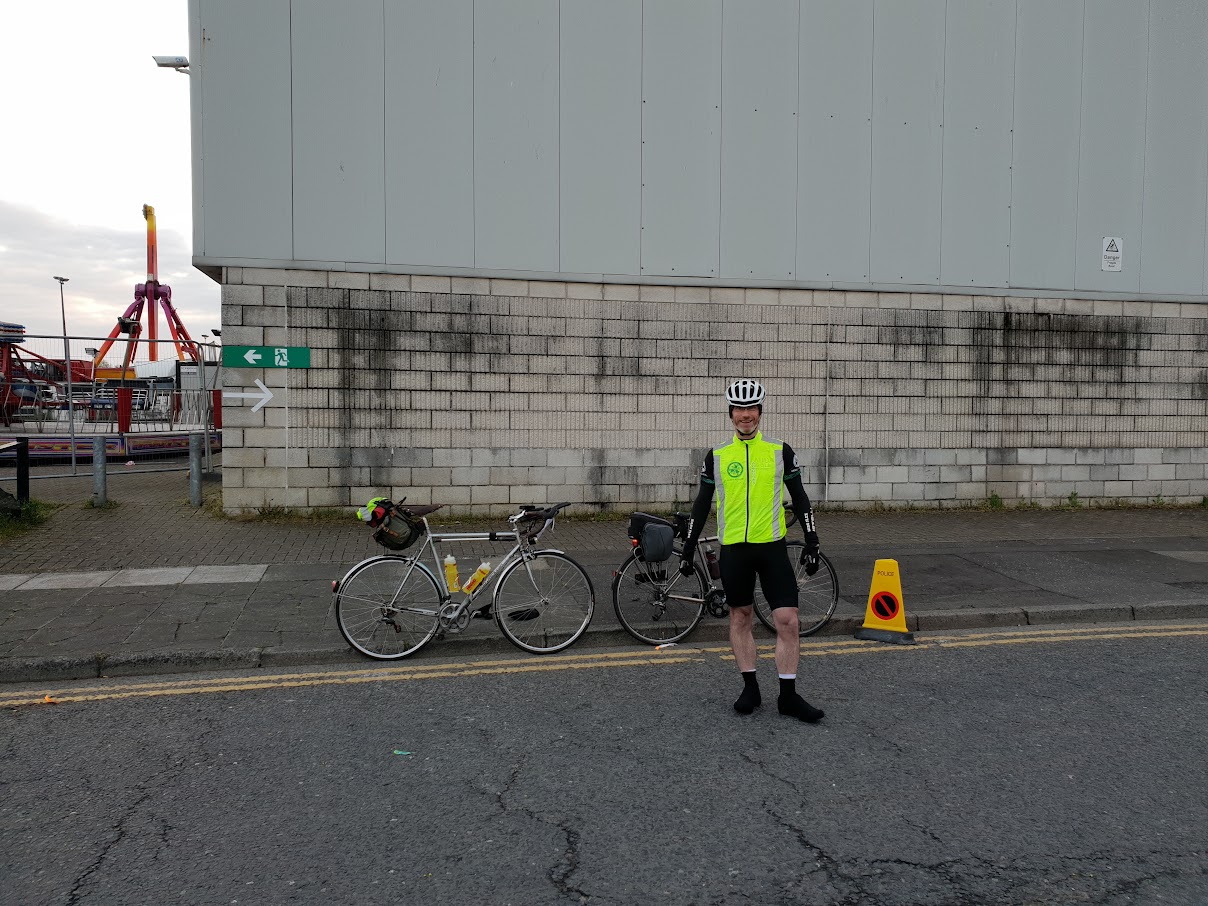 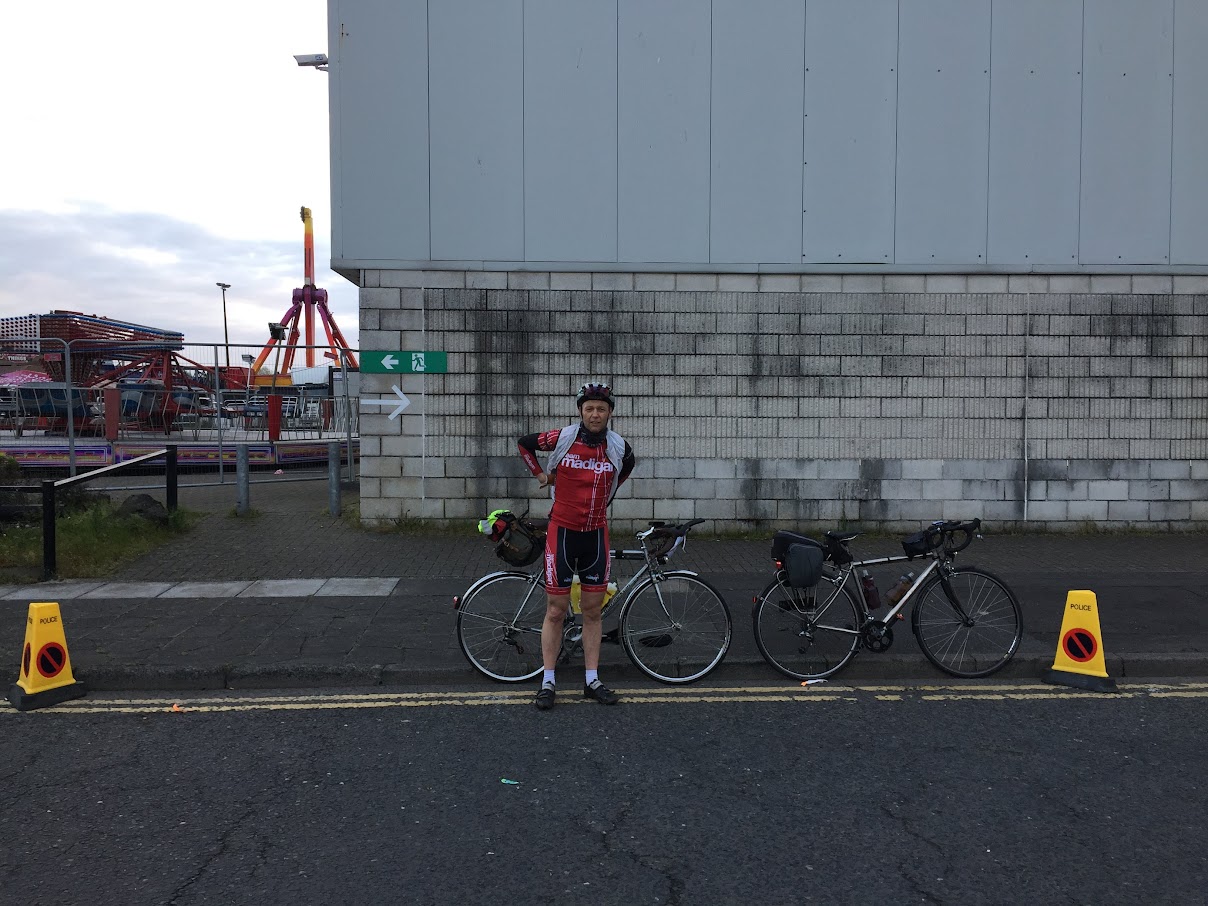 The glamour of the Boucher Road – 6am

The morning of Sunday 6th May say me up early, if not bright. I made my way down to Boucher Road with a certain amount of trepidation; last time I had tried riding this route, in September of last year, I bailed at Ardara, having been held up by some on-the-fly re-routing, due to a collapsed bridge, and a broken drive-side spoke. Since then, I had been off the bike for a few months following surgery to my shoulder, and a poor winter had meant fewer hours on the bike than I had wanted to have at this stage.

I was glad this time to be riding it in the company of Stuart Mclean. He arrived on the dot of 06.00, and we headed off, climbing out of Belfast to the West, over Divis mountain. The weather was dry, and warm enough not to need leg warmers. We soon settled into a rhythm, and reached Antrim before long, where I turned the route off on my Garmin 810. I always have issues with the Garmin crashing when following a route between Antrim and Randalstown. Stuart, with a tcx file loaded on his Wahoo Elemnt, had no such issues. It was showing him every turn just as described on the routesheet. 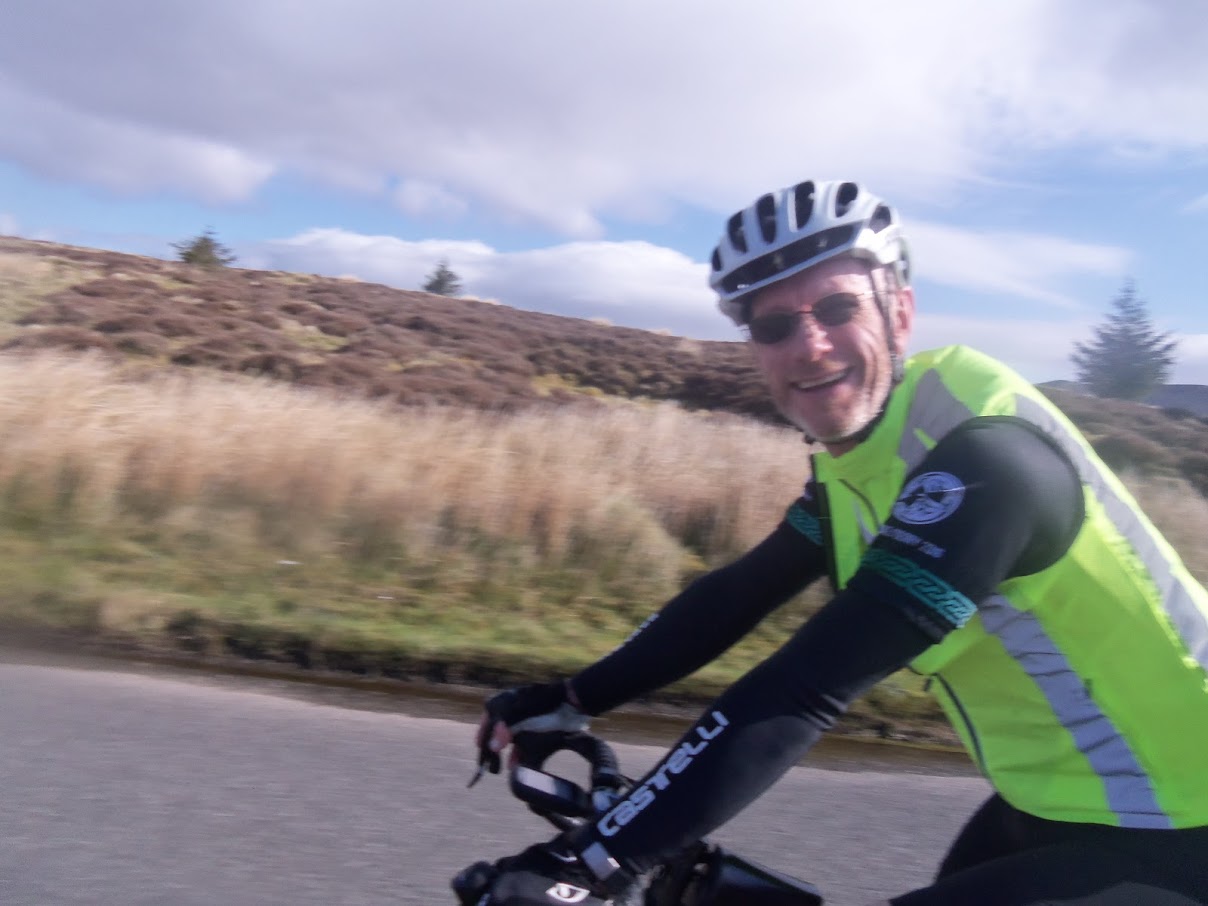 I reloaded the route after Randalstown, and we skirted round the top of Lough Neagh, through Toome and Magherafelt, before arriving at the first control at Draperstown. The owner of the Maxol garage is a keen cyclist, and I have stopped there often enough for him to recognise me and ask what mad endeavour I was up to this time! Fed and watered, we headed into the Sperrins for a bit of an ascent. The open views over the moorland did the sould good, and the miles passed quickly on our way to the border at Strabane. 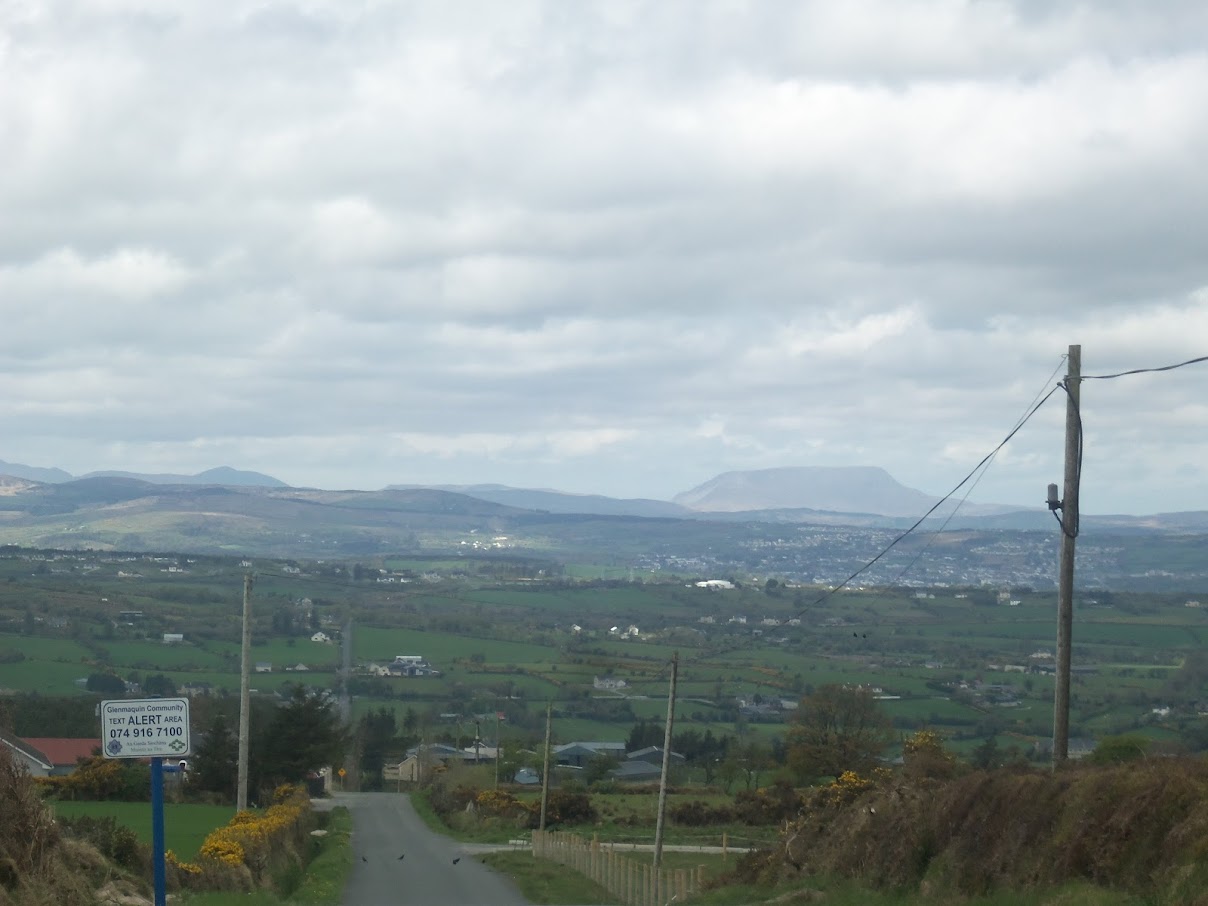 Irish Hill, out of Raphoe, has an innocuous start, squeezing its narrow way between shops in the town centre, but is a good climb, and rewards one at the top with views of Glenveagh National Park, Errigal plainly visible to us on the clear day that we had.

We found a good NISA shop in Letterkenny at the start of Port Road [Stuart’s note – right on the roundabout in as you get into centre before climb.  sandwiches were so good I bought two – though no English mustard for the beef] for freshly made sandwiches and a loo stop. We noticed, too late, that they provided free jugs of water and orange squash. Stuart bought extra sandwiches to take with him – a good idea, since shops are few before Ardara is reached. 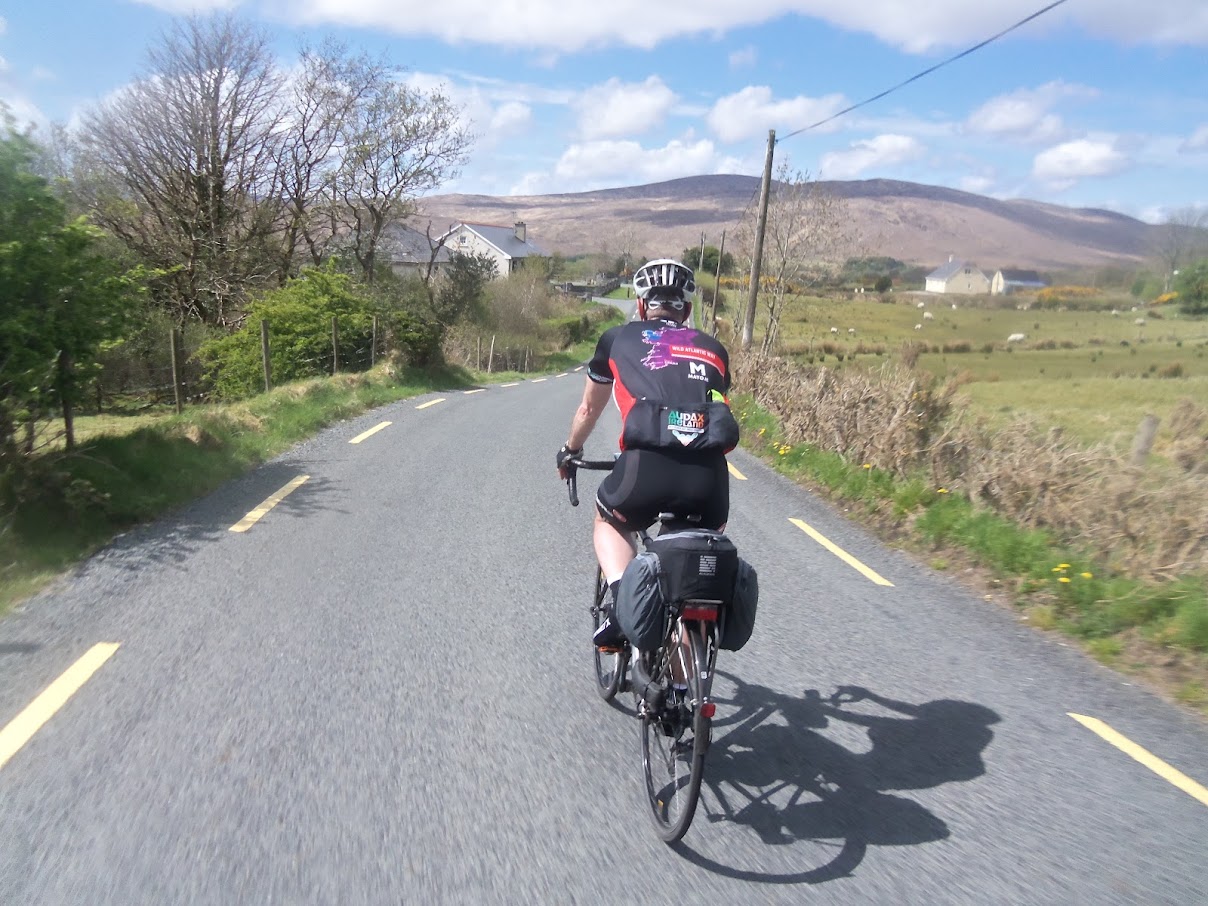 Suitably refreshed, we headed into Glenveagh National Park. Again our eyes were treated to views of vast open spaces. We paused at the high point to take in the view, and then started the descent to Doochary. The wind was very noticeably against us now, and what should have been some easy miles took more effort than we wanted to give. Stuart dispensed with the route map, partly because all the instructions were showing up on his Elemnt, but also for the extra drag it created! 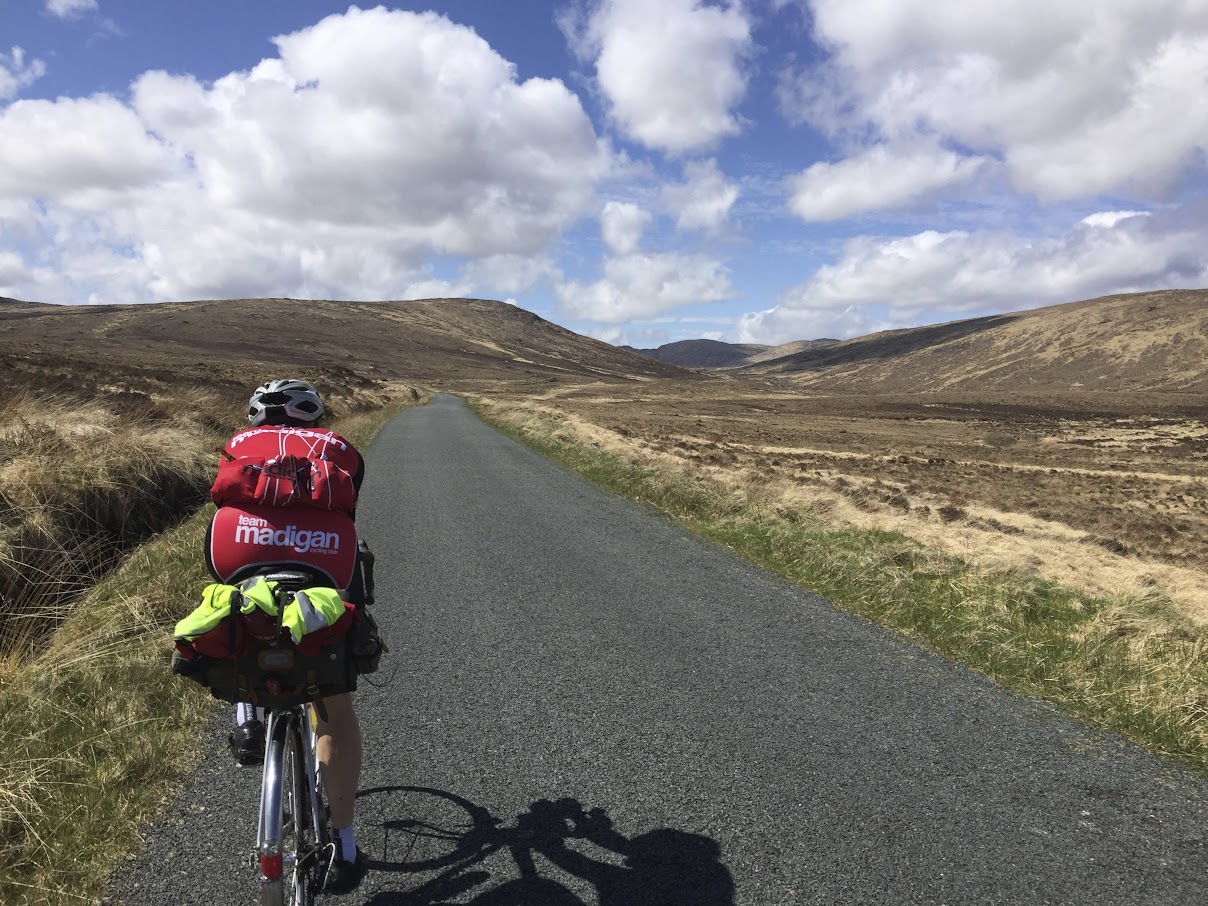 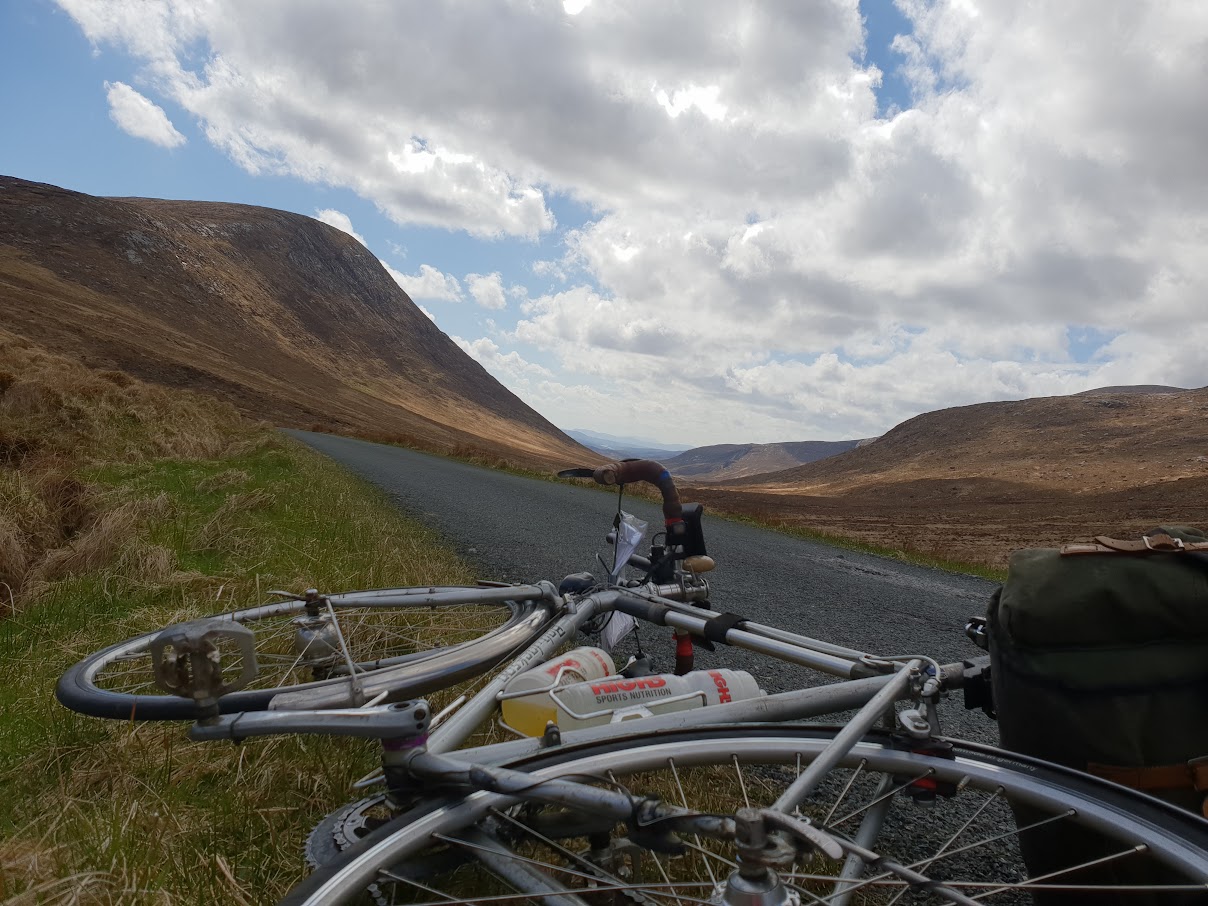 I wasted time in Doochary trying to get two cokes in the pub in Doochary, [Stuart’s note – I didn’t waste this time, I slept on the village bench in the sun!] with a coach load of lads all eager to get their points in before me. The small shop in Doochary was closed on Sunday, but there is another shop a few miles down the road which might make a better re-fuelling point. It was at this point that my 810 threw a hissy fit and dumped the ride that it had recorded up to this point. Thankfully I am used to its tantrums, and take a 500 on longer trips as backup for just this eventuality. Even so, it did make me more envious of the rock solid nature of Stuart’s Elemnt. 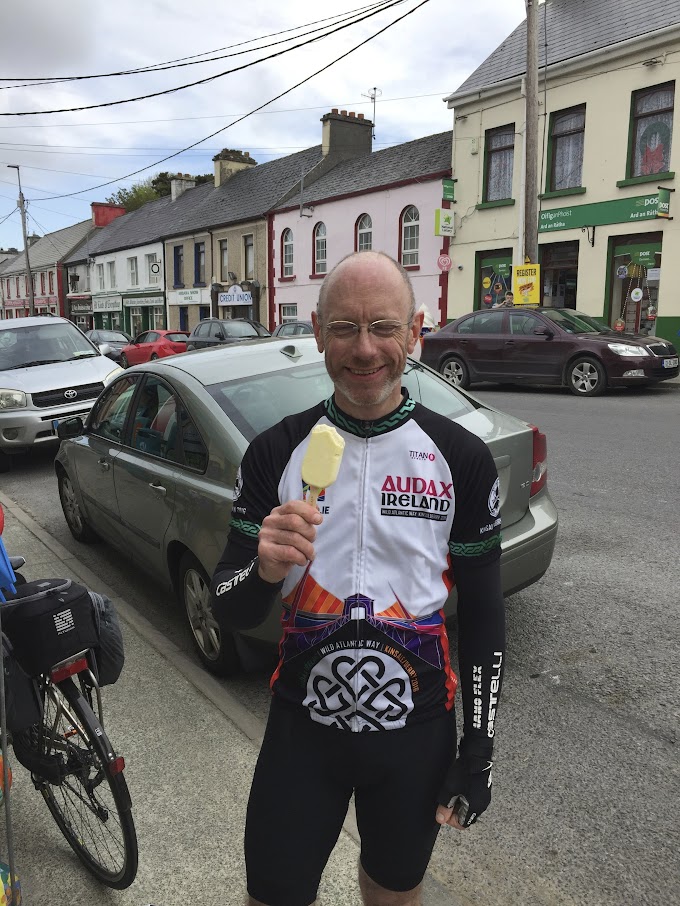 We got to Ardara at 17.15 to be greeted by a bustling town with a music festival in full swing. Calories were ingested to prepare for the ascent of Glengesh Pass. After all I had heard about it, the climb wasn’t as bad as I was expecting, with only one properly steep section at a couple of S-bends. On the way up, I spotted a stone shed that I had briefly slept in during the WAWA. Oh the memories! At the top we met a Scottish cycle tourist, laden with four panniers and a tent, who seemed to be cycling all round Ireland. He was certainly intending to cycle all of the WAW. We were the only other ‘laden’ cyclists he had seen during his entire trip. 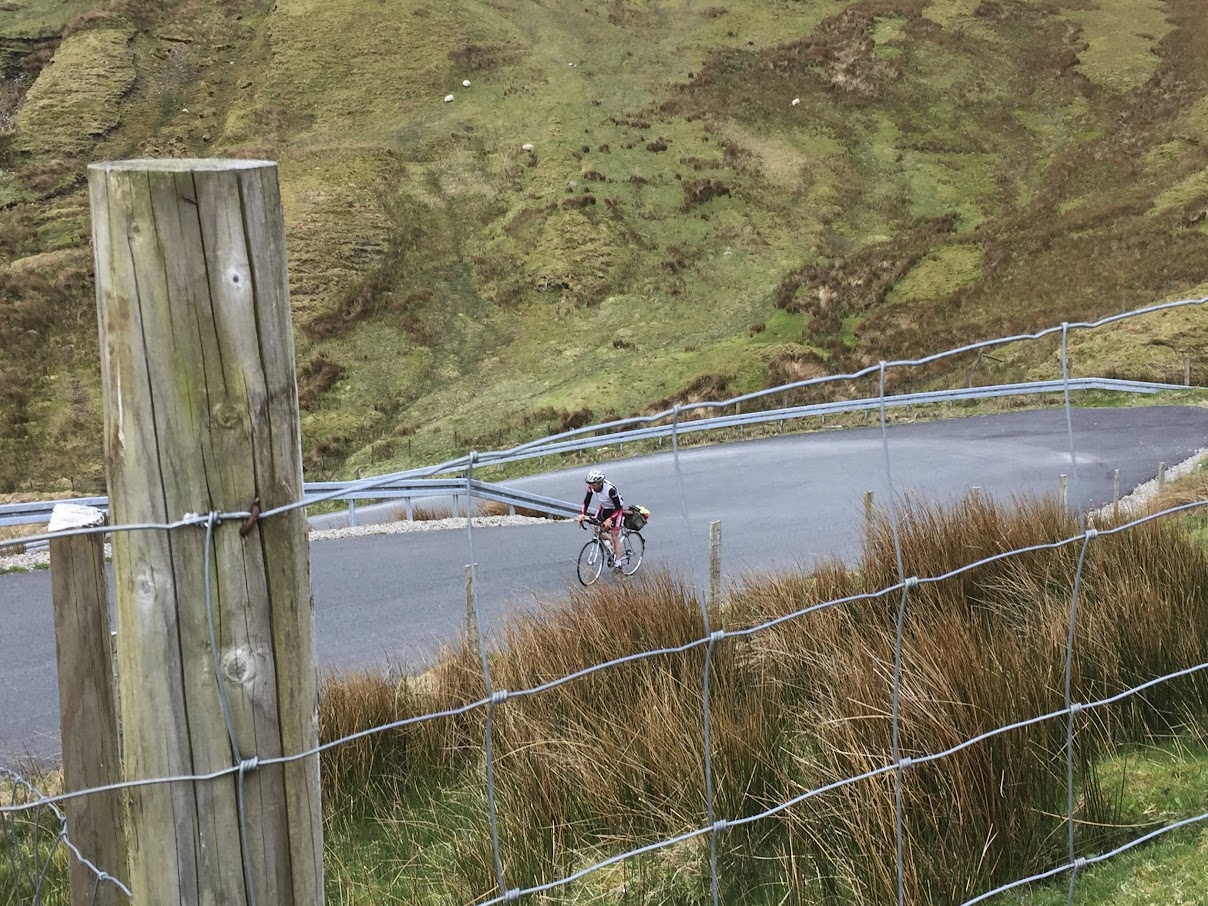 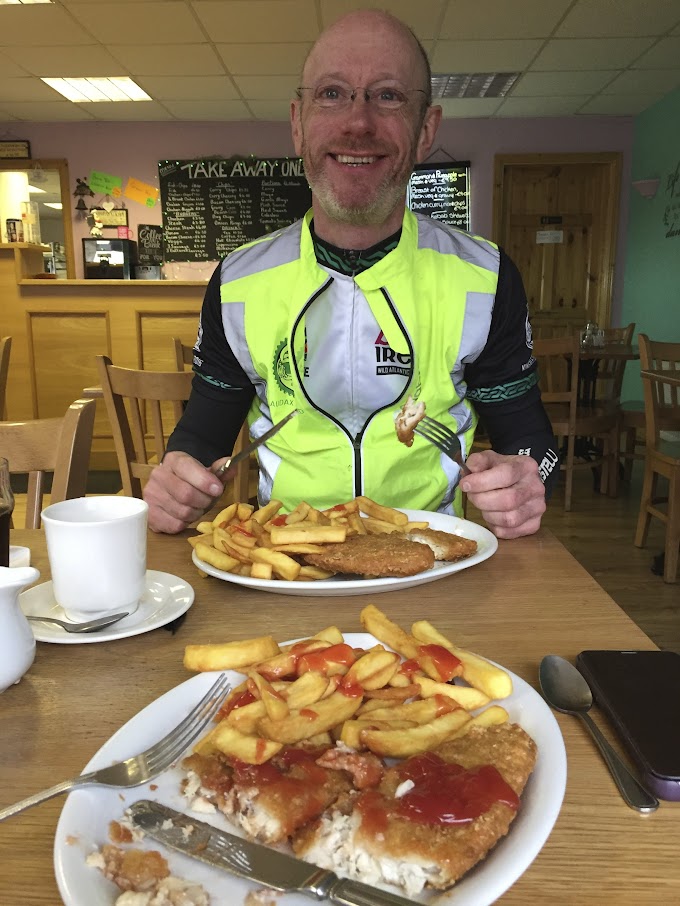 We arrived in Glencomcille at 19.15, and were glad when the diner, officially closed at 19.00, agreed to serve us fish and chips. We must have got some strange looks as we donned leg warmers and extra layers for the evening ride ahead.

Dusk was upon us as we reached Killybegs, and it was properly dark when we passed through Donegal town, where I loaded up the second half of the route. Although we didn’t do this, it would be a good idea to stop here and get provisions to get through to the morning, Quiet roads took us through Rossnowlagh and on to Ballyshannon, where we arrived at midnight. The hostel took a little finding, but we were soon inside and getting our heads down. 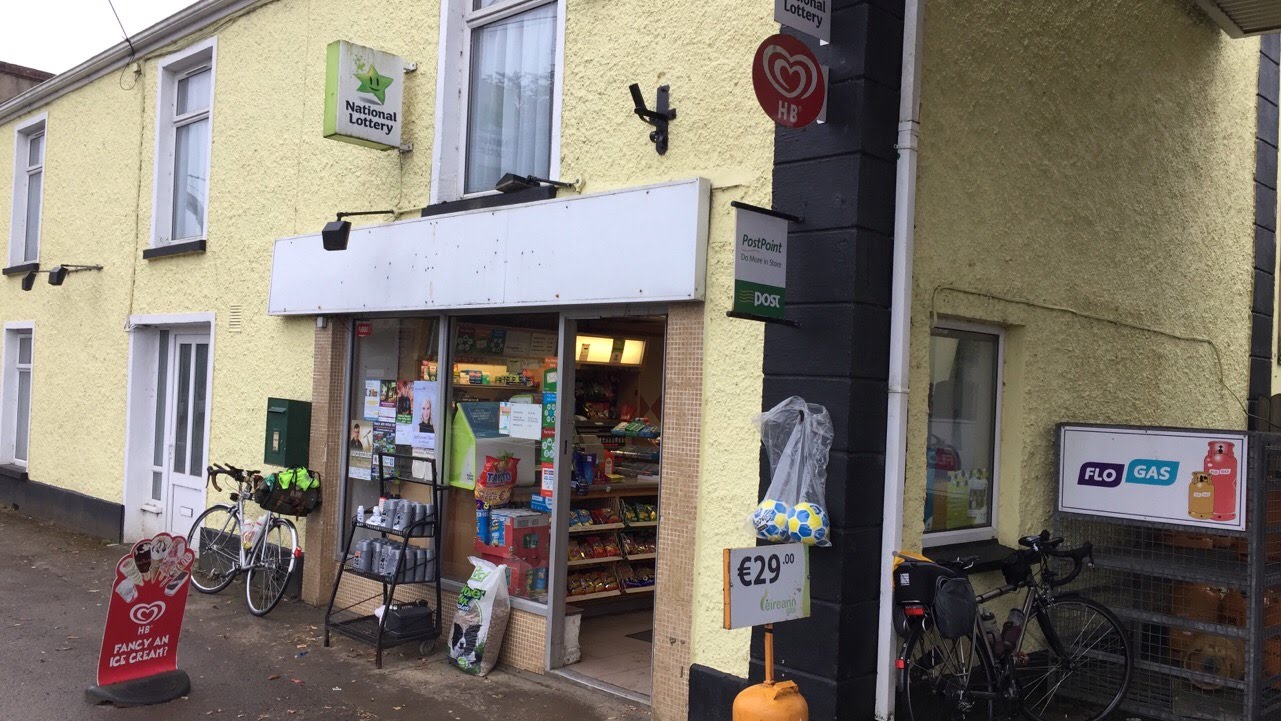 [Coffee might have been instant and the door hanging off the outside loo – but this garage welcome none the less].

Four hours later we were up again, and away just after 5am. The morning was still, and there were lovely reflections in Assaroe lake as we cycled past in the morning quiet. With the early start, we struggled to find andwhere open for provisions, and it wasn’t until we were over the Glangelvin Pass that we found a small shop open in Bawnboy. By this time it had been raining for a couple of hours, denying us any kind of view from the top of Glangelvin. 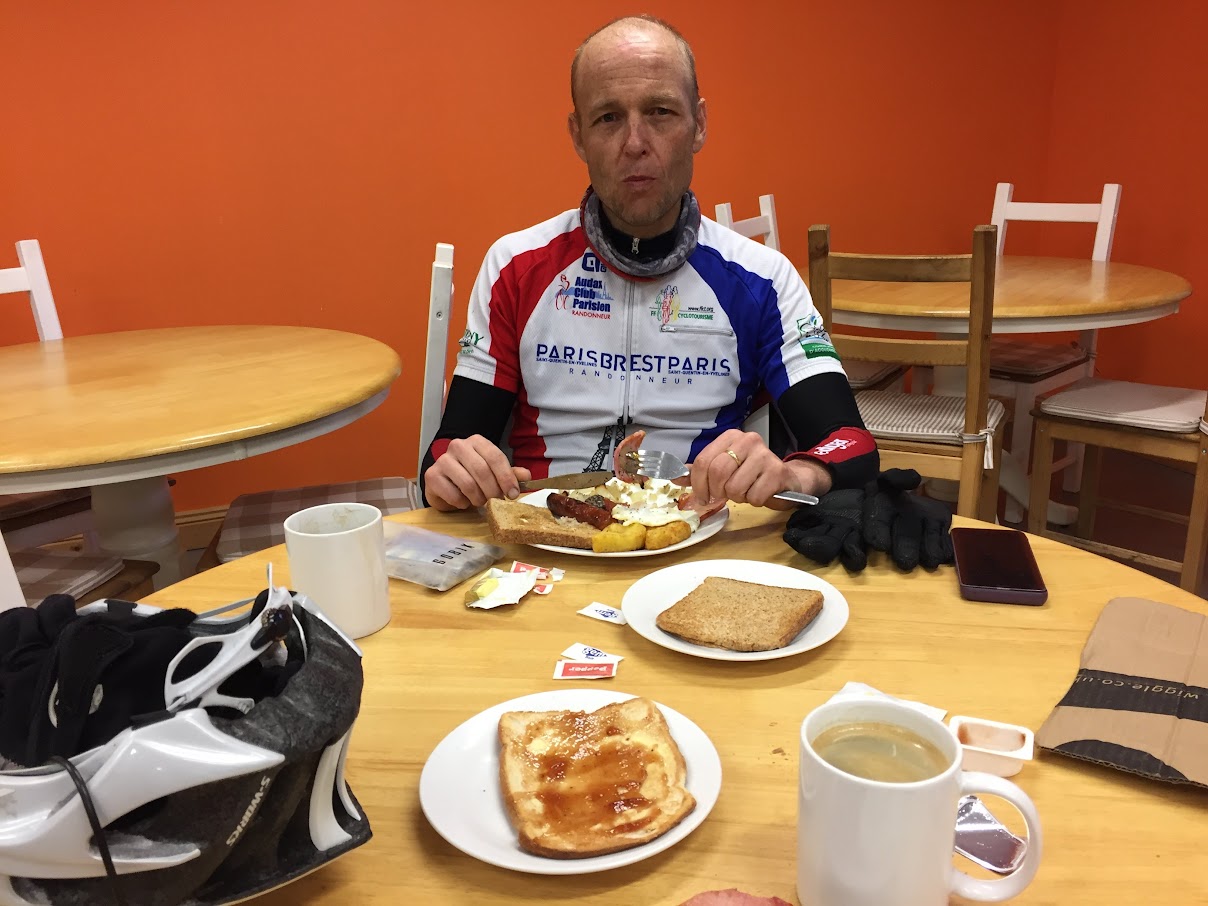 The find of the day was at Killeshandra, where a petrol station at the far end of the town provided a full fry and mug of coffee for about €6. 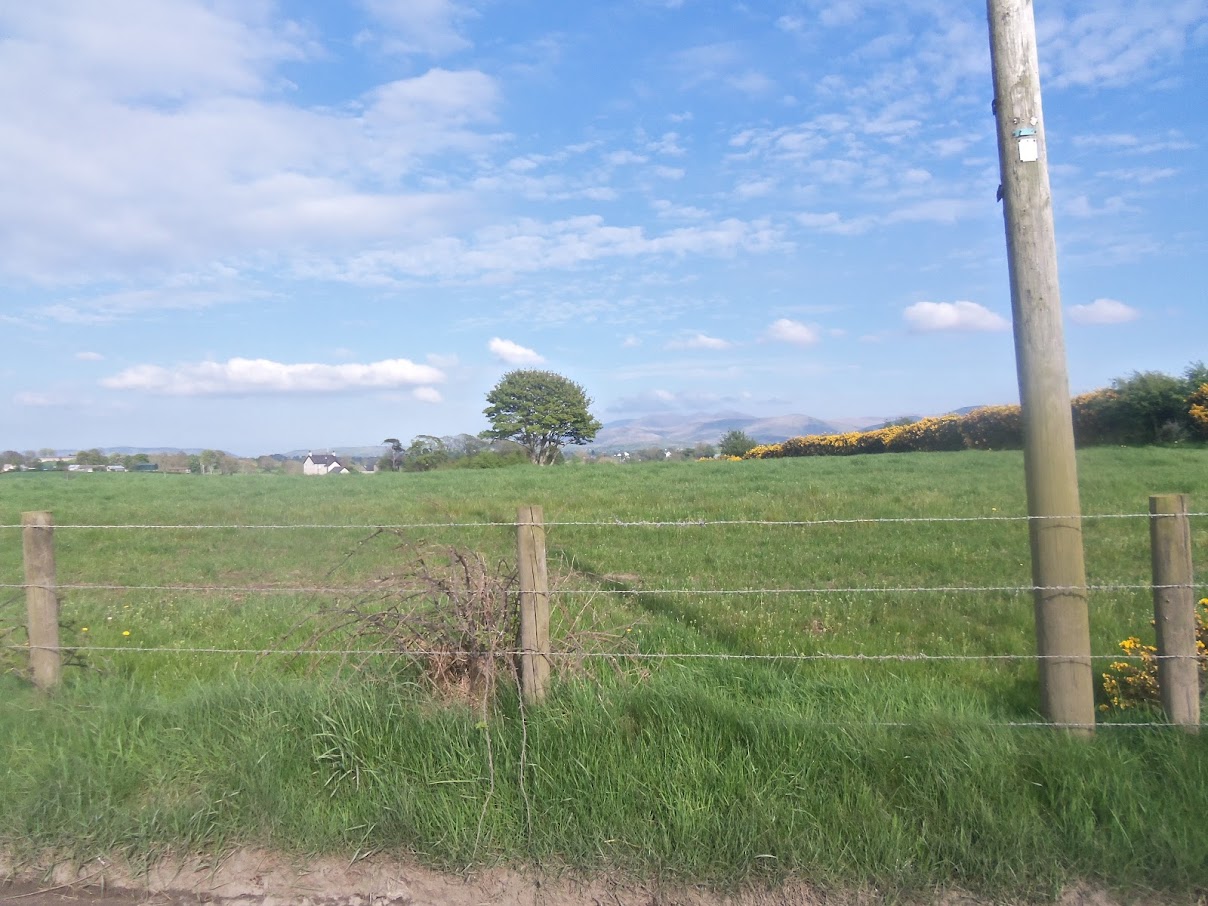 The countryside was generally more verdant pasture than yesterday, with gentle rolling hills. Once in Virginia, we dispensed with arm warmers, since the sun had made a welcome appearance. Stuart made the better choice of meal in a local supermarket, and we then headed North, beginning to get the benefit of the wind that had hampered our progress the previous day. We made good time through the border country, and reached Newry at 16.45. We struggled to find a decent shop, but on our way out noticed Ward’s service station, which has a Spar, and this would be a good place to stop.

A bad place to ride was the road to Mayobridge. The B road had looked good on the map, but was narrow, with a poor surface, and was very busy, with most drivers seemingly intend on ending our lives prematurely. 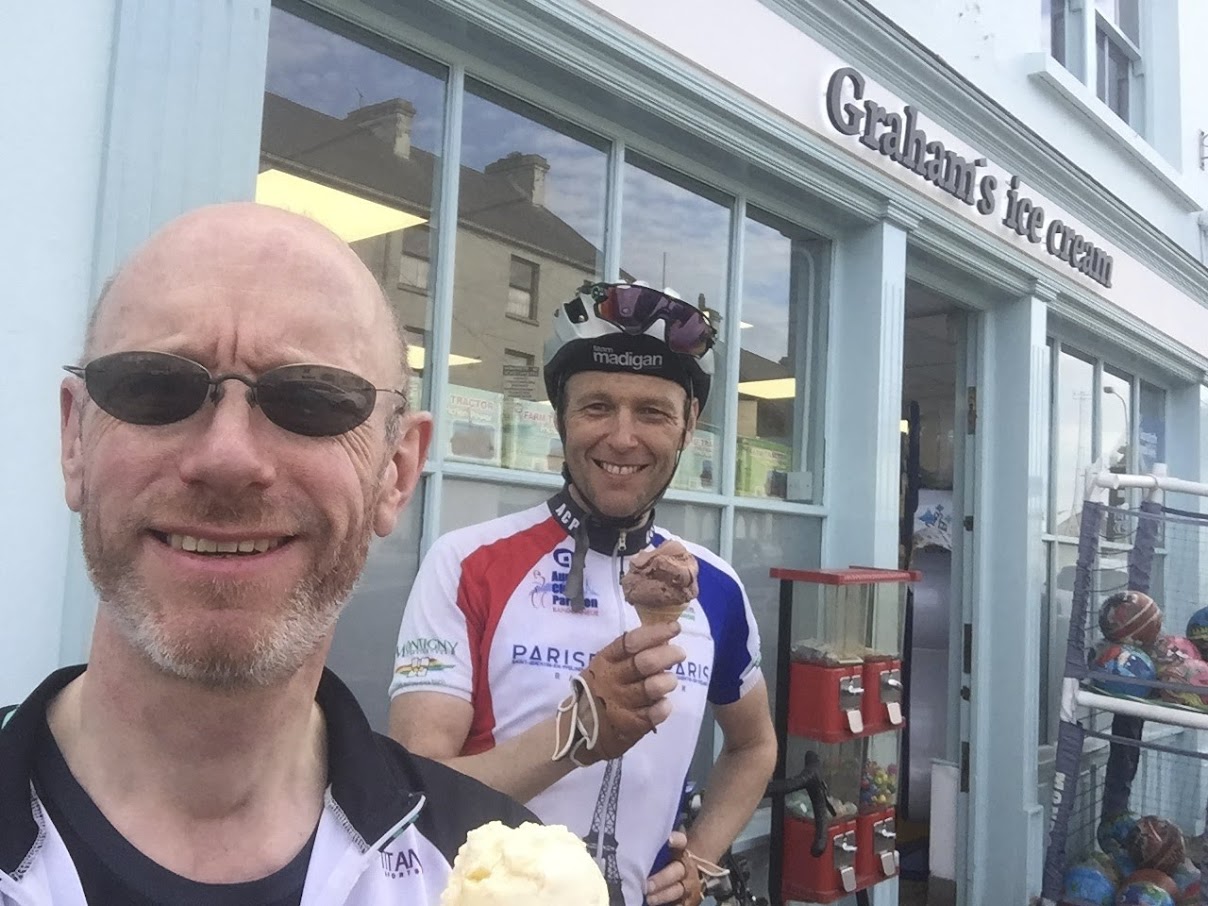 The road north from Mayobridge couldn’t have been more different; quiet, good road surface, and lovely vistas of the Mournes and drumlins of County Down. The sun was out in full force by now, and an ice-cream from Graham’s in Rathfriland was very welcome.

There were a couple of good ascents involved in getting over the shoulder of Slieve Croob, but we could sense that the end was in sight, and were soon rolling in to Belfast, helped along by a tailwind, finishing the ride at 20.15, with 1.75 hours to spare.

The route is certainly not easy, with plenty of hills, but the rewards in terms of views more than make up for the effort required. I would advise all but the strongest to plan a stop around the 300-320km mark, by which time the lion’s share of climbing has been done. 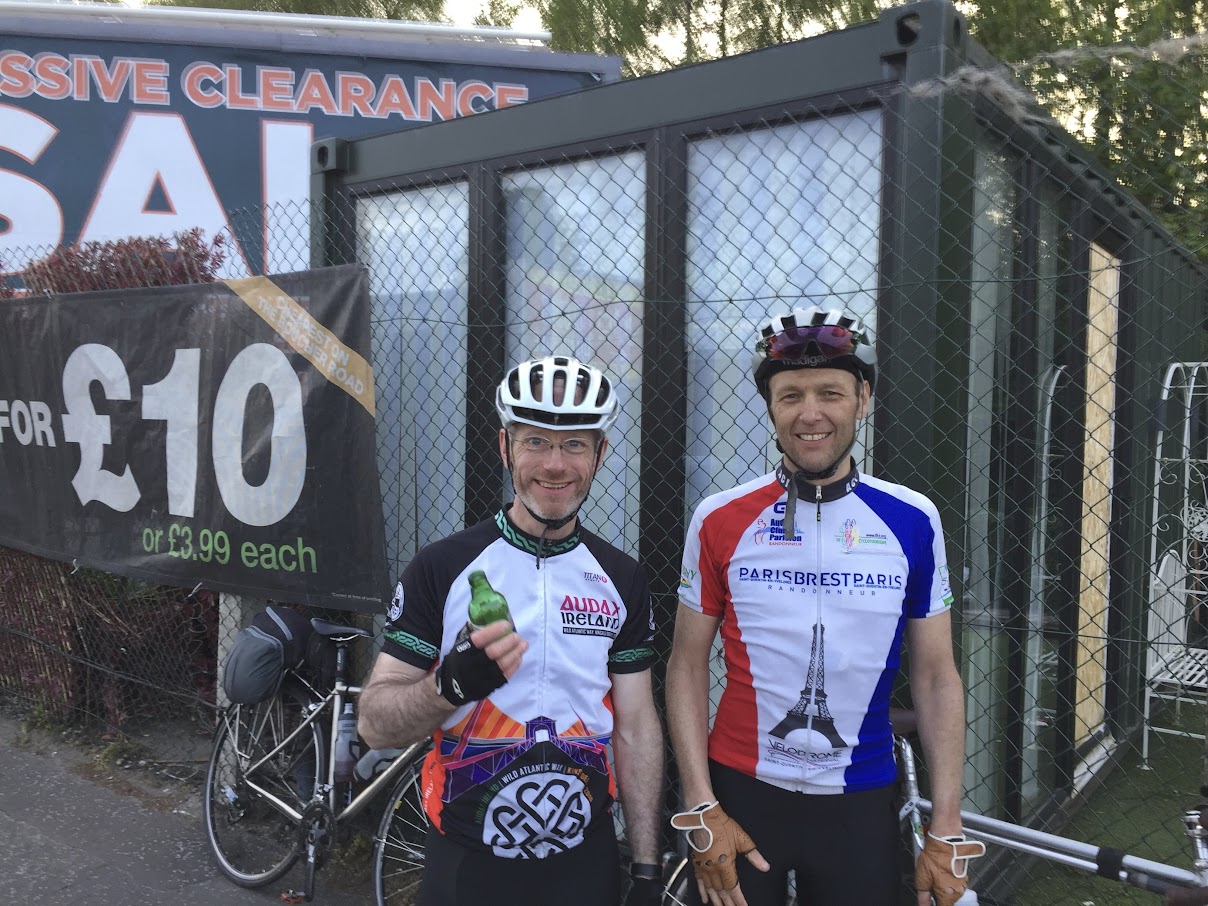 Huge thanks to Stuart for his company and for encouraging me to eat regularly. He’s even contemplating doing it all again on the first weekend in June, Just maybe you should consider joining him…

Paul reports 14 signed up so far for this weekends 600.  If your quick you might get a place.

Although I haven’t got an official forecast from our resident meteorologist yet – looking good so far.

Good luck to all.