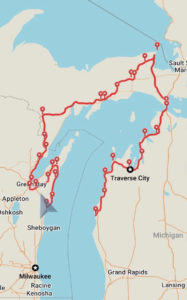 On the recent 3 Provinces ride, Eddie Dunne suggested that I do a write up following my trip to the US for the GLMC 1200 and here it is:

The GLMC inaugural 1200K cycle was the culmination of a lot of effort from two clubs, Detroit Randonneurs and Great Lakes Randonneurs.

I arrived in to Chicago on Monday and was picked up by one of the volunteers and driven the 200km to Manitowoc. On Tuesday morning, when I took my bike out of the case, I noticed that the big ring on the drive chain had been damaged in transit. The local bike shop did not have a spare but the organisers made some calls and a rider coming from another city brought one with them.  I was sorted quickly. Many of the other riders arrived on Tuesday evening. Some of the faces were known or familiar to me including Carol Bell, Vinny Muoneke, Ben Schipper, John Ende who all had completed either the Celtic Knot 1000, or Mile Failte 1200. There was huge experience around with some of these riders appearing in up to their eighth or ninth 1200K this year! 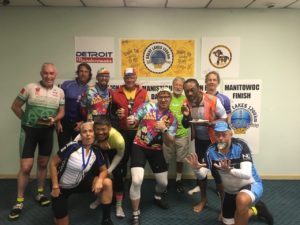 On Wednesday we assembled, had our bike check and cycled the short distance to the ferry which brought us across Lake Michigan. On the ferry, we had our briefing and hi-vis check. It was at this point that I realised that luminous anklets are compulsory in US events! In keeping with the continuous hospitality, I was issued with a spare pair. The Ferry took 4 hours plus, we crossed a time line meaning that we reached Luddington at 7.30pm. 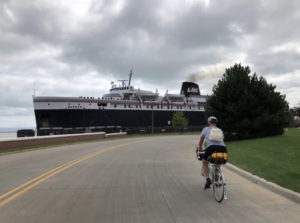 On Thursday morning, we left in very cold and dark conditions for the official start at 5am. As the morning brightened up, the temperatures rose and we were treated to some idyllic cycling conditions. There were many scenic areas on route with lovely lake views and really nice “coastal” style towns with marinas etc. The hills were rolling and anywhere we had a steep climb the payback was immediate with gentle long slopes. I was on my own for about 100K and then I teamed up with Carol Bell and her group of 4 which included Mark Thomas who is very well known in Grand Randonee circles. Mark had researched the route and would always know where a “brew pub” was along the route. We had an excellent meal at our first brew pub in Petoskey with about 80K to go. Our first day was just short of 400K and we reached our destination of Mackinaw City at 10.45pm. Food was provided here before we were driven across the bridge to the upper peninsula. The bridge is 8km long, the second longest in the US but bicycles are prohibited. Our accommodation in a Quality Hotel was on the North side. 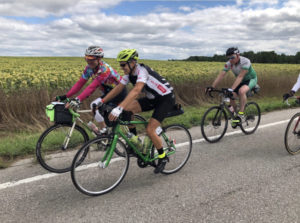 When we got up the next morning, our bikes were ready. We proceeded up to Lake Huron and then on to Lake Superior where we had a control at Whitefish Point Lighthouse from where Canada is visible, being only a couple of miles across the lake at this point. Our weather turned wet and we now experienced the promised headwinds. It was great to be in an experienced group from here on as everyone worked together to battle through the wind. Day 2 was circa 300K, quite flat but the headwind was the challenge all day. As night fell, our group began to sing and the miles went by very quickly. Our second night was in Manistique and again, we had a Quality Hotel. Dinner and breakfast was provided at every overnight and the food was very good quality. 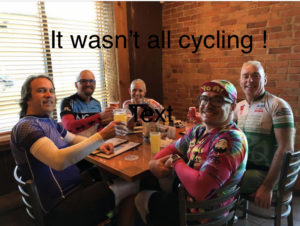 Each day was like a different country in that the terrain was completely different to the previous day. Day 3 brought us through Hiawatha National Forest.  Again, Mark had done his research and had found an excellent diner which served the most wonderful breakfasts. I almost managed to finish my pancake stack! For those who know me, I am capable of putting away a lot of food but the portion size over there was beyond my capabilities.

It was interesting to see signs for Bears and Moose. Apparently some of the riders did see a bear but not me. Most of the animals I saw were road kill which included porcupines, racoons and snakes. There were many black squirrels and lots of deer which can be very dangerous to cyclists as they just run out on the road.

Day 3 finished in Green Bay, the largest city on the route and home to the Green Bay Packers (American football team). 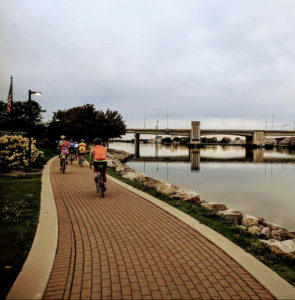 Our last day brought us out on a cycle track along the lake and on to Reynards where they have their “world famous” cheesey potato soup. The soup along with the Mac and Cheese was lovely and went down well. Again, the terrain was totally different to previous days and day 4 brought us through the big dairy farms of Wisconsin. Most of the cheese consumed in the US comes from Wisconsin. However, unlike Ireland, it was rare to see any cows in the fields. Instead, there were fields and fields of corn with enormous sheds on the farms where cattle are fed indoors continuously. We also went through some private roads owned by the Nuclear company who kindly gave the organisers permission.

Our last 10 kilometers were again on a cycle path which had very few users and we arrived at the finish in Manitowoc with 1230K on the clock at 7pm giving a total of 85 hours.

Due to the nature of the cycle, the majority of cyclists were finished within a couple of hours of each other and thus there was a party atmosphere for the remainder of the evening with stories swapped of events and incidents along the way.

I was particularly impressed with the courtesy shown by motorists along the way, together with the hospitality of the personnel in service stations who signed our cards as defacto Audax controllers.

The organisation of this ride was excellent from the very beginning with clear and regular communication in the lead-up. The hospitality was second to none. There were a total of 35 volunteers on the event without whom as always these events cannot happen.

I would highly recommend this event when it comes around again in 2022.