“You’re not local otherwise you wouldn’t be coming down this!”

My alarm wakes me at 5:30am. I scurry around repacking my pannier bags, despite my best efforts the day before I have comedy sunburn on my arms and fingers giving me the appearance of invisible gloves. Sun cream reapplied and with two protein bars and a battered banana inside me, I collect my belongings and sneak downstairs to get my bike. The mist from the night before still shrouds the village and I’m happy with my decision to stop.

The road onwards is a false flat along the valley floor. The sun is up and it promises to be another windless, sunny day. 10km of undulating narrow road brings me up another valley. My bike scares a pheasant into the hedges and rabbits flee when they spot me. A nice descent along the contours of another valley brings a sting in the tail with a steep ascent back to the A road. Welsh roads sometimes tell you how steep the descent is but not how steep the ascent is on the other side. Once you see grit boxes you know you’re in trouble and it’s over 20%. By then my 34×32 isn’t low enough and I’ll be walking. 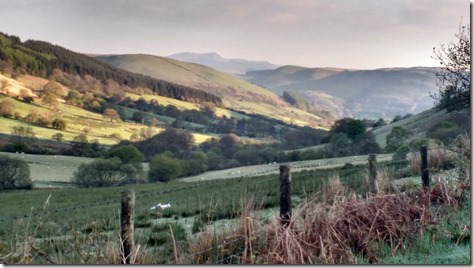 On the way to Bwlch y Groes at 7 am

Through the small hamlets on the road to the climb of Bwlch y Groes, it’s waiting for you and it’s a magnificent climb when it appears around the bottom of the valley. You see the road twisting its way up the side of the mountain and you know you will be riding up it, there’s no way out now The final km before the actual climb is steep enough. Two early morning walkers with their dog moved out of my way but I told them I’d be going slower than them and not to bother. My legs carried me up the first part of the climb but then I couldn’t go any further for the final 1km. There was a sheep on the road with one crumpled horn that frankly took the piss. It stood in the middle of the road eyeballing me, then it would trot ahead of me, wait for me to catch up and trot on defecating as it went. My walking method on steep hills was to stop, change cycling shoes into a pair of runners stuffed into my panniers, walk 50 paces, pause, walk, pause etc. When the road flattened to less than 12%, change back into cycling shoes and cycle off again. The sheep kept me company right to the top of the climb only turning off into a field with other sheep when the fencing ended and the open moorland began.

The sun was merciless and the views were fantastic. The descent to the lake before Bala was uneventful apart from the bone-rattling cattlegrids. The lake was mirror smooth with the surrounding mountains reflected perfectly on its surface. I could just make out the church towers of Bala in the distance and the prospect of breakfast. 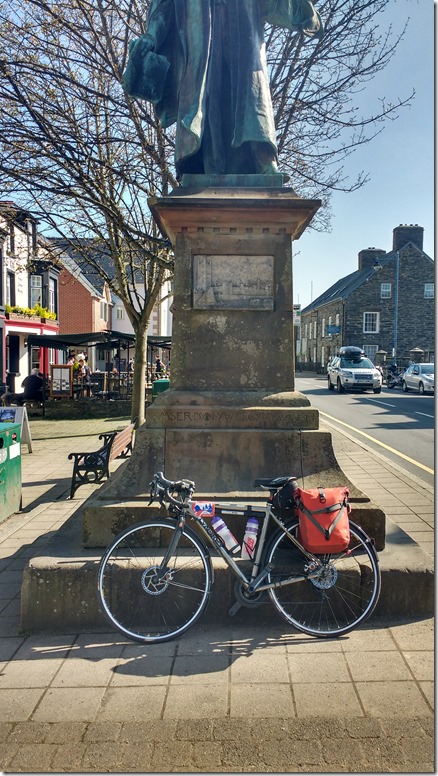 Bala was bustling, motorbikers roared up and down the main street. Cars with colourful kayaks on roof racks passed towards the lake. I locked the bike outside a Subway and then sat in the sunshine beside the statue eating a ham sandwich, milk, tea and yoghurt. I wasn’t feeling too bad but I was concerned about time given that my progress didn’t seem to get any faster.

Once I left the A road it was back to the now familiar grotty farm roads following the contours of streams and steep little valleys. I could just hear the roar of motorbikes on the A road in the bottom of the valley. The route passes close to Frongoch, site of the infamous post-1916 internment camps that educated many an internee in the ways of Irish Nationalism. It’s all been razed now with nothing to see but fields and hedgerows. 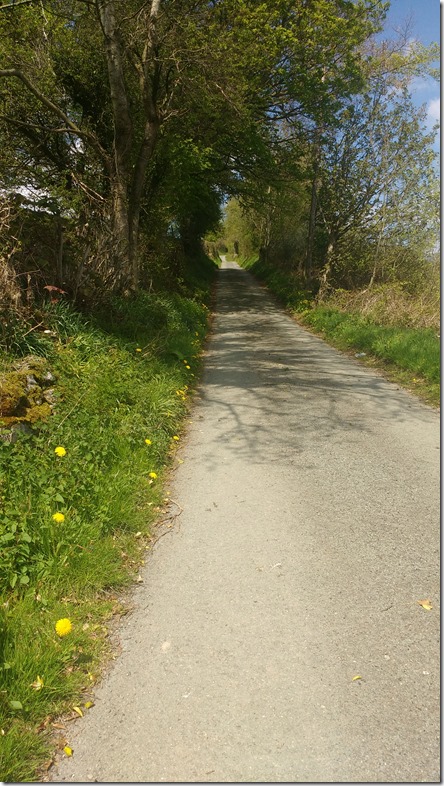 The route becomes more convoluted at this point and criss-crosses itself. The stretch between Llansannan and Llanfair Talhaiarn is some of the worst road I encountered on the whole trip. The Garmin indicated that I was to go up a road in the village that had a sign saying it was unsuitable for heavy vehicles in two languages (my Welsh was becoming more proficient as time passed!). The road briefly turns a corner and then goes straight up a wall, a badly surfaced wall with grass in the middle. The Welsh believe that hairpins are for wimps. If there’s a hill, you’re going right up it with no deviations. When it eventually flattened, I bumped my way around potholes, through farm muck and through patches where there was no surface at all. Coming to the descent I was treated to a sign informing me the gradient is 30%. Reader, I walked the last 100m, fighting the bike that wanted to slide sideways down the hill. 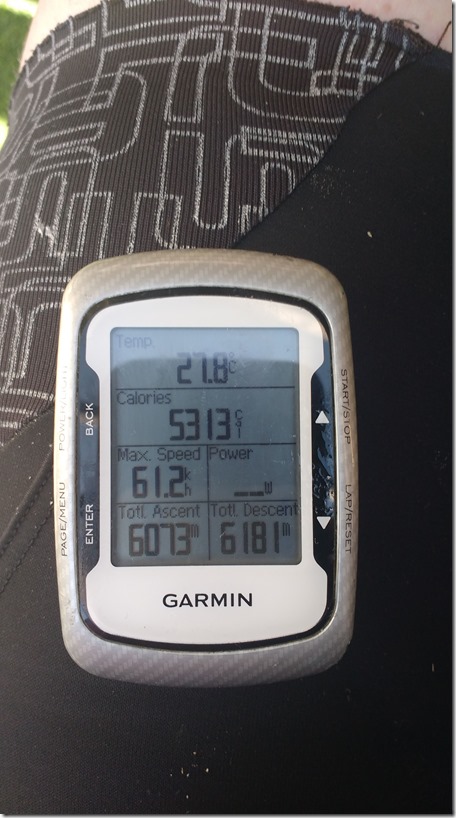 The route then takes the main road to Abergele, an honest climb up and a nice easy descent into the town. It was 14:47 when I parked my bike in the back of the George and Dragon pub. While I ate red pepper soup and refilled my water bottles I looked at the Garmin: 316km done, 6,073m climbed at an average speed of 17.2kph, slow REALLY, slow. 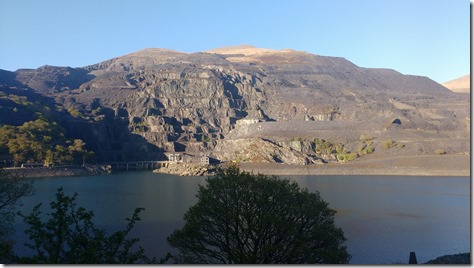 Retracing my way back to Llanfair Talhaiarn the road turns West and on to Snowdonia. The climbs get longer and more spread out, the mountains are bigger. Having said all that, the mountain road section after Llanrwst on the way to Capel Curig is nasty enough, grit boxes line steep slopes through a forest and then there are speed bumps covering drains on the way down to the main road. The main road to Llanberis was thick with motorbikers and cars. People sat outside pubs enjoying the afternoon sunshine. Two lads zipped past me in kit on the way up to Llanberis Pass, there was no way I was going to keep pace with them. Llanberis Pass was an absolute delight in the way up and down, just find a low gear and use it. There were plenty of walkers at the top of the Pass.

I stopped to take a photo and a woman approached me and asked about the LEL jersey I was wearing. Her boyfriend had ridden it last year the same as me. She was amazed when I told her what I was doing in the middle of Wales. Trying to explain why you’re cycling 600km, solo, in two and half days to a normal person sounds kind of daft. No, it’s not for charity, yes it’s fun! Bidding her goodbye, I rode down the Pass into the setting sun and Llanberis. A quick stop, 18:47, 370km done. Llangollen was my next hotel 110km away. I was feeling better than I had 24 hours earlier. My legs were grand but I couldn’t go any faster. Based on my average speed it was going to take me many hours to see a bed.

Back up the Pass, the last of the walkers trickled past me on the way back down to their parked cars. The motorbikers had disappeared and I had the roads to myself. Ascending the mountain road to Llanrwst wasn’t as bad from this side, those were some hills that if I never ride them again it’ll be too soon. The sun had completely set by the time I reached Llanrwst, the mountains had gone from gold, to plum and purple. I stopped to get some food in the main square in Llanrwst. The counter staff were cleaning an overworked ice-cream machine. A large capuccino, sandwich and two yoghurts were my main meal. I still had a banana and various protein bars in my pack and on my person. 9pm.

The climb out of Llanrwst went on, and on, and on. It didn’t help that I knew the road from earlier in the afternoon. The night wasn’t completely black with no mist, I could tell when the top of a climb was near, the trees became silhouettes against the stars and I could feel a slight breeze across the crest. It was a perfect star filled night. I’m pretty sure I saw the ISS but it didn’t see me. The sun was gone but a faint glow could be seen on the northern horizon. Behind me the Snowdonian mountains shrank into the night.

The road to Denbigh was back to the usual up and down across steep sided valleys on small roads. In the dark all that could be seen of the road in my lights was a wall rising up in front of me. Not enough time for recovery between the steep climbs. Few cars passed me, god knows what the occupants thought. Somehow I missed a turn on a corner after Llansannan, 2km later I realised my mistake and retraced my route back up a hill. The clue that I had gone wrong was that I was going down hill. More valleys until a lovely 4km of flattish A-road into Denbigh. 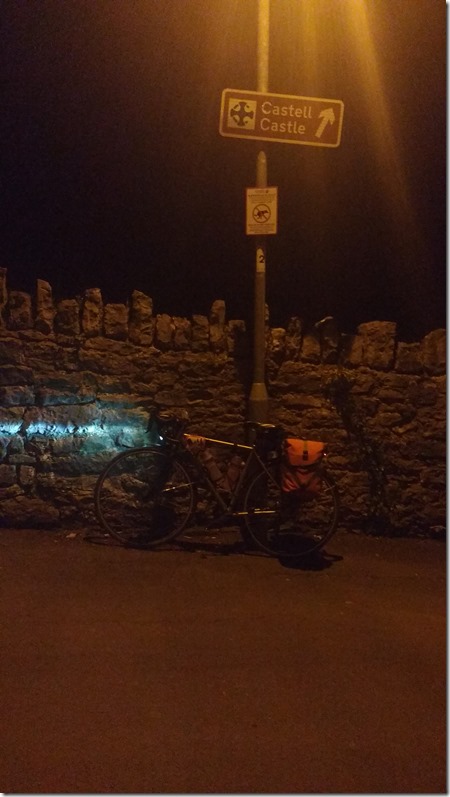 Trying to photograph a castle in Denbigh at 1 am Sunday

Trying to photograph a castle in the dark at 1am is nigh on impossible. As I tried to clip in on a steep hill after the castle, I fell over, scattering jellies from my bar bag with the bike on top of me. Nothing damaged but I could feel where the bruises would appear on my legs and arm. Next stop Mold. Even in the near dark I could see a ridge of high hills barring my road. By now some 430km in I know that the route is definitely going over them not around them. Again the road goes straight up, no mercy shown to a small tired woman with a heavy bike. I have time to read the road signs as I gamely walk the bike. Moel Arthur, similar to “maol/bald” in Irish. It is indeed a tree-less hill. Down to another A-road and respite before Mold.

On the way into Mold a blood-red rising moon hangs over the town, surreal in a star lit sky. The glow of the towns over the English border is visible in the East. Mold is quiet at 3am, nothing but taxis and the odd bread van. The route turns south up into the hills on the way to Llangollen. I’m tired but coping, by now I know that no matter what I’ll have to be on the road again before 8am. Not much sleep for me tonight. The first light of dawn is appearing over my left shoulder as I turn off a minor road onto a farm track. Sheep appear in my front light, sleeping on the trackway itself. They are not impressed by me and they bleat and their lambs huddle beside them. This time three farm gates bar my way. I wrestle with them and the bike twists away from me threatening to fall over again. The last drag up to the top of Horseshoe Pass is only bearable because I know Llangollen is near. The route takes a minor road at the top of the pass. I career down a rutted track on the side of the mountain, the houses below me in the valley distorted to doll size from my perspective. Nearly 22 hours on the bike and I pray to any deity that I don’t crash now. Over speed ramps and back onto the A-road into town. A quick photo beside the railway station and I barge my way through the double doors into the reception area of the hotel as the town clock strikes 5am. 475km 9,276m.