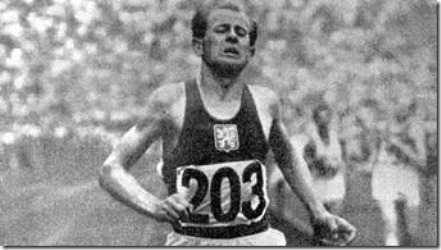 The world will be waiting a long time to witness an athlete of Emil’s calibre again. The Czech distance runner won the 5000m, 10,000m and marathon at the Helsinki Olympics of 1952. Over the 7 days he accomplished this, he also set 3 Olympic records. It was also his first time to run a marathon.

The darling of the Communist Regime , the easy going Emil soon fell foul of The Party as he never shied away from expressing his opinions. After speaking out against Russian aggression in his homeland, he lost his cushy number in the Army and spent the next 6 years working in an open cast uranium mine. The Regime’s plan of having him returned to Prague as a bin- man in order to publicly humiliate him soon backfired. The people held him in such high esteem they chose to empty their own bins as a mark of respect to their champion. He was quickly transferred to the countryside to dig ditches, away from public view.

Not very inspiring, but a useful tool if you are a light sleeper. They can come in useful in the days leading up to PBP. Light sleepers may find it hard to sleep in the controls so, taking a set of earplugs with you

is important. Occasionally, by error, people are not awoken at their requested time. Consider setting the alarm on your phone to ring 10 minutes after your designated time in case you are overlooked.