The final memorial (HARRY CLARKE WINDOW) is where the event starts at THE SCOTS PRESB CHURCH ,CLONTARF (info courtesy of HILARY FAIRMAN,RESIDENT HISTORIAN of THE SCOTS PRES CH) 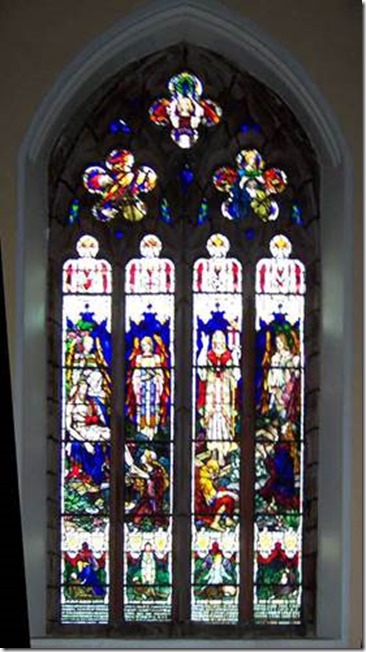 The 1914 – 1918 Great War Memorial stained glass window was designed and made by Harry Clarke, R.H.A.

In general the design is more conventional in treatment than one normally associates with the work of Harry Clarke, but it must be remembered that it was executed in a transitional period of his career. Nevertheless the drawing up of the figures and details, plus the use of rich colours and especially the use of the deep blue, which he loved so well, convey the elements of Harry Clarke’s distinctive style of work in stained glass.

The treatment of the main subjects and also the smaller ones at the base of the window display a sensitive and imaginative approach to the interpretation of the scenes depicted.

The main subjects which are the dead Christ in the lap of the Virgin Mary, His Mother, with Mary Magdalene at His feet and on the right the Resurrection of Our Lord with Mary Magdalene at the empty tomb, are beautifully rendered and angels artistically placed in these two subjects contribute to the solemnity and spiritual nature of the scenes depicted.

The uppermost, or tracery, part of the window is no less beautifully rendered in vibrant stained glass. The tracery is composed of one quatrefoil shape and two cinquefoil shapes, one at each side. On the left we see a soldier struck down by a blast of gunfire and on the right an angel holding a wreath and ministering to the fallen soldier. In the quatrefoil at the top of the window an angel holds aloft the laurel wreath which is the symbol of victory, fame and honour.

At the bottom of the window there are eight small shields placed on the Gothic ornament which occurs just above the small scene below. These small shields depict from left to right, the insignia of the Australian Commonwealth forces, the Royal Munsters, the 13th London Regiment, The Royal Irish Horse, the Connaught Rangers, the West Yorkshire Regiment, the Royal Dublin Fusiliers and the RAF.

Beneath and along the whole width of the window is a long inscription commemorating those members of the church who had laid down their lives in the Great War 1914 – 1918.

The above scenes and detail in the window must have required a great amount of consideration and research on the part of those who commissioned the window, and on the part of Harry Clarke himself who had the task of interpreting artistically the subject matter to be depicted in all its details.

The skill and artistry required for this work necessitated an involved technique requiring the greatest concentration in its execution. It is thought the work received a first and second painting and firing and most likely a third painting and firing in the more intricate parts.

“TO THE GLORY OF GOD AND

GRATEFUL MEMORY OF THE SONS

OF THIS CHURCH WHO LAID DOWN

ERECTED BY THE CONGREGATION

They shall not grow old, as we that are left grow old:

Age shall not weary them, nor the years condemn.

At the going down of the sun and in the morning

We will remember them” 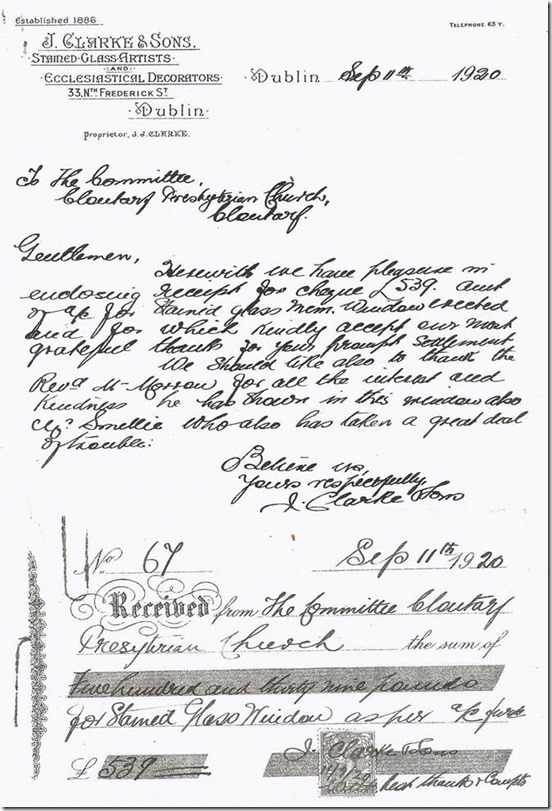